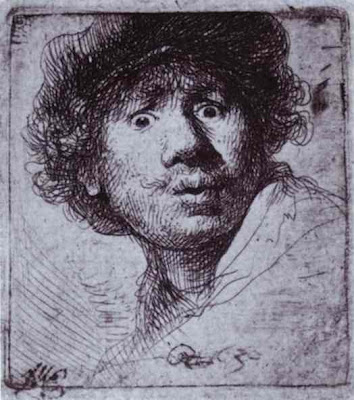 Is there any more interesting draftsman in history than Rembrandt? Born July 15, 1604, Rembrandt may not be able to compete with the soaring Renaissance works of Michelangelo or with the most photographic renderings of hyper-realists, but the personality injected into each of his drawings and etchings places him in a category of one. Rembrandt’s Self-Portrait with Wide-Open Eyes (above, from 1630) certainly makes you smile by his mugging in a mirror, but the real eye-opener for me here is the frenetic hatching with which the portrait is created. Through a wide array of hatching techniques, Rembrandt builds up the darkest darks while simultaneously creating the subtlest shades. The sheer energy of the line makes the portrait instantly engaging, complimenting the warm humor of the facial expression, which clearly comes from clowning rather than concern. Rembrandt plays around with the techniques he’s mastered, showing off all his “trick shots” for the crowds. If art history were a basketball game, Rembrandt would be the Harlem Globetrotters. 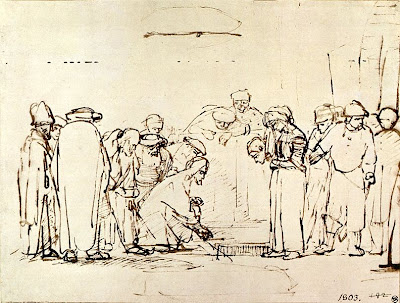 Rembrandt brings that same playful energy even to religious subjects, such as Christ and the Woman Taken in Adultery (above). In The Gospel of John (John 7:53-8:11), the scribes and Pharisees bring a woman “taken in adultery” to Jesus, asking him if they should stone her to death, as the law demands. Rather than take the bait, Jesus stoops and begins drawing in the dust with his finger. Rising from the dust, Jesus says to the crowd, “He that is without sin among you, let him first cast a stone at her,” and then returns to his drawing on the ground. The crowd disperses, leaving only Jesus and the woman, whom Jesus forgives. Rembrandt selects the moment at which Jesus draws in the dust, the moment at which the savior himself becomes a draftsman in order to save the woman’s life. Rembrandt’s drawing lacks finish, but the rawness only adds to its appeal. Just as Jesus “broke” the law to serve a greater purpose, Rembrandt breaks the laws of art to serve the greater purpose of his vision with all its raw electricity. 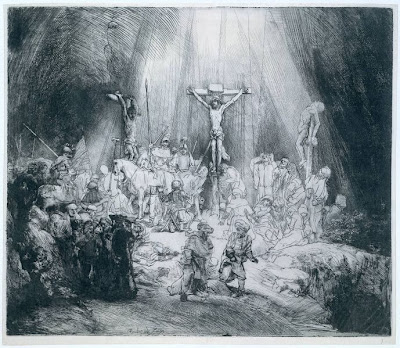 In his etching The Three Crosses (above, from 1653), Rembrandt follows the rules of finish and composition more closely, but still infuses his special energy into the drawing. Beneath the crucified Christ and the two thieves, a mosh pit of humanity teems at their feet, making the dying men seem even lonelier from their lofty position. The rays of light falling on the three men pierce the scene and focus the eye, yet you’re always aware of the people below. Despite the number and size of the crowd members, Rembrandt invests each one with individuality and a slice of the drama to play out. I’ve found myself searching through the crowd over and over, wondering at the little narratives scattered from left to right. Of all the depictions of the crucifixion, I’ve always found this one by Rembrandt to contain the most humanity. For sheer grandeur, the Renaissance wins hands down. But for a sense of the sweat, blood, and sheer chaos of a public execution, Rembrandt has no peer. It is this comprehensive scope, from the playfully comic to the painfully pathetic, that makes Rembrandt one of the truly encyclopedic artists of the human condition in any medium.

I love that Rembrandt portrait!
What few realize (because of reproductions like this one) is that the original is very small forcing the viewer to step up close to see the detail.
Then of course you are met by this surprised face of the artist as if frightened by your intrusion into his personal space.