Strong to the Finnish 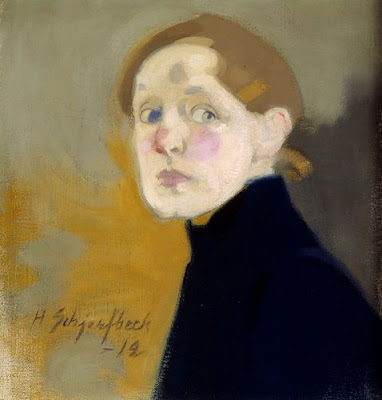 Fame is a relative term, often dependent on time and place. In Finland and the rest of Scandanavia, Helene Schjerfbeck’s art and life occupy a place in the public consciousness comparable to that of Frida Kahlo in North America. Yet, in North America, Schjerfbeck’s work remains relatively unknown. Born July 10, 1862, Schjerfbeck lived a life as painful, if not as colorful, as Kahlo’s. The two women do share a gift for revealing self-portraiture, such as Schjerfbeck’s 1912 Self-Portrait (above), painted while in ill health and living in a remote Finnish village, the artist depicts the pure anxiety of her existence. “Now that I so seldom have the strength to paint, I have started on a self-portrait,” Schjerfbeck wrote in 1921. “This way the model is always available, although it isn’t at all pleasant to see oneself.” Like Edvard Munch, Schjerfbeck internalized the coldness of Nordic life and painted a personalized version of that angst. Surpassing Munch, Schjerfbeck dealt with the body issues all woman face in the mirror every day by painting herself with unflinching honesty, redefining beauty itself. 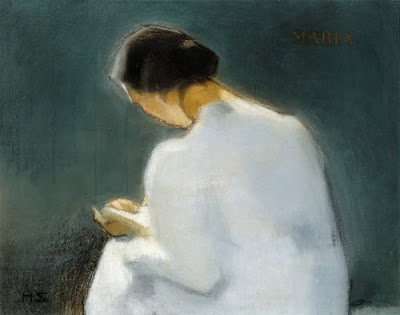 An art prodigy at an early age, Schjerfbeck traveled across Europe in pursuit of an arts education, eventually studying with Léon Bonnat in Paris. Illness forced her to abandon the cosmopolitan life, condemning her to a rural existence for the last fifty years of her life as if trapped in an Ingmar Bergmann film. Under these conditions, Schjerfbeck painted the subjects at hand, particularly women going about their daily tasks, such as in Maria (above, from 1909). Like her Danish contemporary Vilhelm Hammershoi, Schjerfbeck paints interiors and their inhabitants almost claustrophobically yet with an obvious affection. It’s interesting to contrast the work of Schjerfbeck with that of Mary Cassatt, a slightly older contemporary who also concentrated on the role of women in the late nineteenth and early twentieth century. Whereas Cassatt’s paintings burst with color as part of the great cosmopolitan carnival she enjoyed, Schjerfbeck’s paintings quietly document not only the women themselves but also the quiet spirit of perseverance surrounding them. 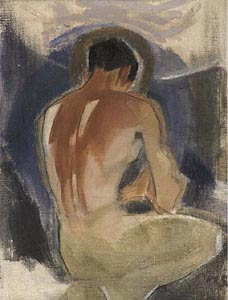 During her life, Schjerfbeck did gain some recognition in exhibitions of her art. Unfortunately, just as she’d return to the glamorous life, another death of a family member or her own illnesses would demand a retreat back to seclusion. In works such as Robber at the Gates of Paradise (above, from 1924), Schjerfbeck tried her hand at the universalizing themes that Munch attempted in his own serial works known collectively as “The Frieze of Life.” Such pictures defy attempts to classify Schjerfbeck as purely a woman painter of women’s subjects and demonstrate the depth and breadth of her vision, despite the confines of fate. There’s something mythic about the figure in Robber at the Gates of Paradise, almost a Promethean flavor as if the stolen piece of paradise was completely worth it. In her paintings, Helene Schjerfbeck stole more than her share of paradise without ever leaving her room.