Voice From the Past 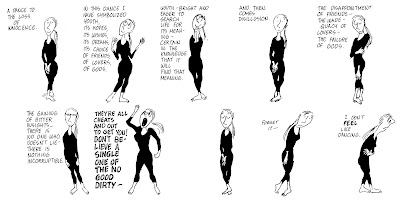 When George Carlin died recently, I thought back to how I felt when Kurt Vonnegut died. Both men developed their critical, humane, humorous voices during the Eisenhower years of the 1950s and helped shape the direction that the tumultuous 1960s would take. After reading Jules Feiffer’s Explainers: The Complete Village Voice Strips (1956-66), I nominate the ground-breaking cartoonist, still very much alive, for that short, distinguished list. After apprenticing under comics pioneer Will Eisner from 1946 through 1952, Feiffer looked for a new outlet for his talents and views. “Feiffer wanted to use comics to stir things up and to get into the thick of the fray,” Gary Groth writes in his introduction to Explainers, “but there wasn’t much of a fray to be in the thick of in the mid-‘50s.” When The Village Voice began publishing on October 25, 1955, Feiffer found his home. Given “basically… carte blanche on the spot to do whatever he wanted” when hired by the Voice in October 1956, Feiffer went on to create over 2,000 socially conscious cartoons for the next 44 years. This volume, the first of four covering Feiffer’s full career at the Voice, presents “practically an encyclopedia of issues preoccupying the public intellectual from 1956 to 1966.” Feiffer took the ideas of contemporary thinkers such as I.F. Stone, Murray Kempton, Eric Fromm, Lewis Mumford, and others and made them accessible through an endless pantheon of characters such as the prone man immobilized by doubt, young couples talking over drinks, and his most memorable figure—the Dancer. In a strip from December 2, 1959 (above), the Dancer offers “A Dance to the Loss of Innocence” that rails against “The disappointment of friends—the inadequacy of lovers—the failure of gods.” Reading through Feiffer’s cartoons from 1956 through 1966 we relive in “real time” a generation’s loss of innocence, rising to the peak of the Kennedy years before descending to the nadir of Vietnam. 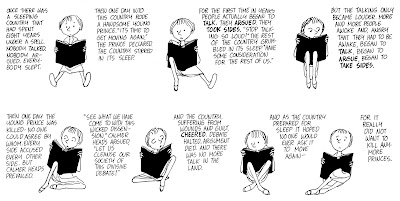 For those who know the 1960s only from history books or popular culture, Feiffer brings it all to life with honesty and nuance. Looking back at the 1960 Presidential Debates between JFK and Nixon, Feiffer writes: “Those who like Nixon think he won. Those who like Kennedy think he won. Those who think both men are inadequate thought both men were inadequate.” As Groth points out, “Feiffer considered himself a radical in contradistinction to liberalism, which he felt was insufficiently principled.” Feiffer’s radicalism allows him to poke fun at both sides. As Feiffer writes in a May 24, 1962 strip, “The mark of a mediocre man is a mediocre ideal.” Feiffer never allows himself mediocre ideals, waiting instead for a brass ring to reach for. After the Kennedy assassination, Feiffer didn’t fall for the Camelot-laden mythology but did credit Kennedy for effecting a change in the American discourse. On January 2, 1964, Feiffer responded to the assassination with a strip featuring a child reading a fairy tale of a fallen prince (above), but not the standard tale issued. “Kennedy woke us up,” Feiffer says. “The Prince kissed Sleeping Beauty, she came awake again but instead of living happily ever after, we started quarreling over all those issues we long suppressed.” Civil rights, the military-industrial complex, and sexuality—issues dormant during the 1950s—all moved to center stage in the 1960s, refusing to be silenced again until the “princes”—JFK, RFK, MLK–slept in the earth. 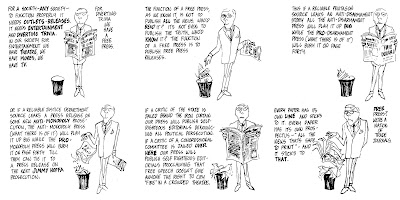 It is impossible to read Explainers and not draw parallels between that era and today. A strip such as Feiffer’s March 30, 1961 caustic piece on the “free” press (above) could easily have been written today. “For diverting trivia we have a free press,” the man shown says. “The function of a free press is to publish free press releases.” In today’s world of the media “echo chamber,” in which “embedded” journalists lose all independence and fall into government-approved stenography, Feiffer’s words seem both prescient and disturbing—proof that the media’s current state existed nearly half a century ago and seems to have only gotten worse. “Free press?” the man asks. “We’re a nation of trade journals.” The corporate consolidation of media, now possible on an unprecedented scale thanks to the removal of most monopoly protections, makes Feiffer’s accusation of “trade journals” seem even more stinging. “Much of what I was going after was what government did with language—the double-speak that Orwell wrote about so brilliantly in 1984,” Feiffer says. Only a complicit media can make the “double-speak” stick and the “memory hole” permanent. 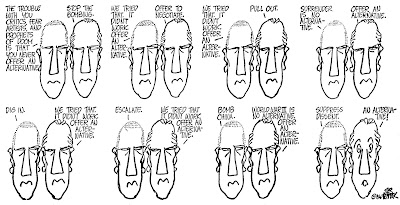 “The trouble with you critics, fear artists, and prophets of doom is that you never offer an alternative,” says the talking head of the establishment to the talking head of dissent in Feiffer’s landmark strip of November 10, 1966 (above), drawn during the heat of the Vietnam War escalation. The dissenter offers alternative after alternative until the establishment voice offers a final solution—suppress dissent. Feiffer fights censorship in all its forms, however tranquil. “If suppression can not disarm criticism,” Feiffer writes on May 4, 1961, “amiable acceptance can.” This “amiable acceptance” most often takes the form of “The Radical Middle,” whose lukewarm panacea for 1963 is “Bold times call for bold answers. Within reason. In a manner of speaking. More or less.” This “Radical Middle” approves of “free elections just so long as there continue to be no real differences between the parties.” Feiffer’s writing, however embittered it may seem, remains a bracing tonic for those looking for change at the ballot box. The timing of the republishing of these works couldn’t be better for an American audience. 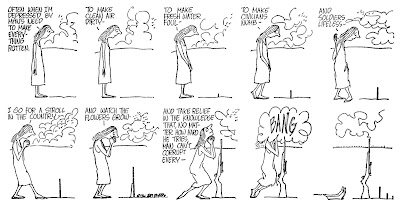 By the end of the first volume of Explainers, Feiffer seemingly loses all hope. “For me, getting out of bed in the morning is an act of false confidence,” Feiffer writes in 1963. By the end of 1966, even that false confidence is gone. In a December 15, 1960 strip riffing on Samuel Beckett’s Waiting for Godot, one character remarks, “There seems to be a direct line between waiting and disappointment.” The long wait takes it’s toll on Feiffer, as shown in the April 21, 1966 strip in which the Dancer looks to embrace Spring in all its hopefulness only to have a gun literally flower from the earth and kill her, as more guns appear poised to rise behind it. “The old fogey in me doesn’t expect much,” Feiffer says today, “but the boy-cartoonist in me remains foolishly idealistic as ever, but not foolish enough to involve myself directly or politically again.” “Scratch a cynic,” George Carlin once said, “and you’ll find a disappointed idealist.” Feiffer’s past disappointment demonstrated in these pages serves as a cautionary tale for both idealists and cynics today. Step into the time machine that is Jules Feiffer’s Explainers, relive the days of hope and the days of disillusionment, and come to understand the full meaning of the label “cynic” as both an earned badge of honor and an unwelcome curse.

[Many thanks to Fantagraphics Books for providing me with a review copy of Jules Feiffer’s Explainers: The Complete Village Voice Strips (1956-66) and for the images above.]