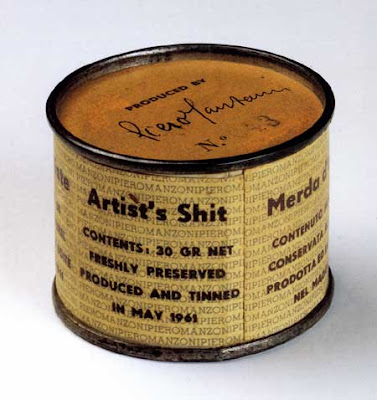 When Piero Manzoni saw Yves Klein’s all-blue paintings in 1957, the direction of his own art changed forever—in the opposite direction. Born July 13, 1933, Manzoni decided to poke fun at not only Klein’s art but the whole conceptual art world. Manzoni created a series of works that he called “Achromes,” which were colorless works on canvas, rabbit’s fur, fiberglass, and even bread rolls. If Klein set out to say nothing in his works, Manzoni would say even less, taking his speechlessness and rendering the art world even more speechless with his most famous work—Merda d'artista (above, from 1961), in which Manzoni canned his own excrement, labeled it as such, signed it, and sold it for outrageous prices. Even today, Manzoni’s Merda d’artista sells for more per ounce than gold. Of course, we take Manzoni at his word that the cans contain what he says they do. Nobody’s ever looked inside one of them to check. (Would you?) If they were filled with something other than what’s advertised, Manzoni would have pulled even a bigger joke on collectors than if they actually did contain the artist’s, uh, personal oeuvre. 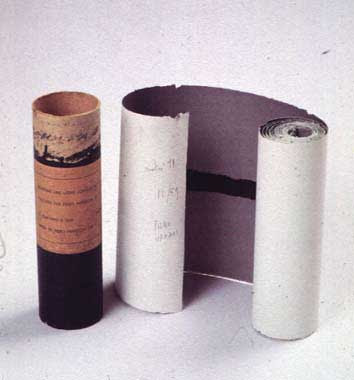 Someone did open one of Manzoni’s Lines of Exceptional Length (as seen above, from 1960). Manzoni drew a thick single line on incredibly long rolls of paper (the longest was 7.2 km), rolled up the paper, and placed it into a canister for sale. He dreamt of leaving a roll in every major city in the world. The lines, if ever joined, would circle the earth at the equator. Manzoni’s odd creations would span the globe, offering conceptual art to public ridicule at the same time it reached its highest point of financial success. Manzoni pushed harder and harder against the boundary of what the art-buying public would accept and came away time and again astounded by what he could get away with. At one exhibition, Manzoni sold hard-boiled eggs into which he’d pressed his fingerprint for the buyers to consume on the spot, ironically pointing out the absurdity of collectors who will purchase anything with the right signature on it. 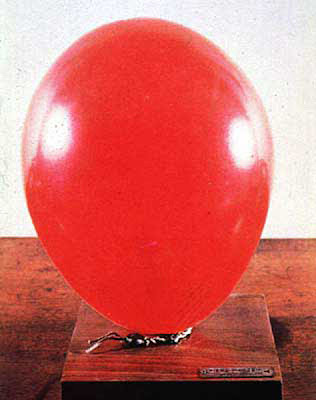 In Fiato d'Artista (literally “Breath of the Artist,” above, from 1960), Manzoni blew up a red balloon, placed lead seals on it, and mounted it to a plaque bearing his name and the title. The idea of immortalizing something as fleeting as a moment’s breath shows the depth that Manzoni’s concepts could achieve when he wasn’t thumbing his nose at the critics and their public. Today, Manzoni’s Artist’s Breath is nothing more than a withered red balloon on a wooden plaque. Manzoni breathed his last in 1963. That same year, Piero Manzoni; The Life And Works appeared—an artist’s book consisting of the title page followed by 100 pages of blank, clear plastic. To the end, Manzoni said nothing, but said it with style and humor (however scatological).