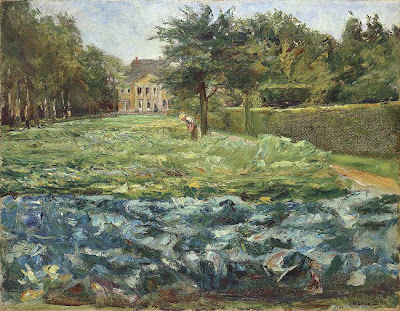 Best and brightest, come away,
Fairer far than this fair day,
Which, like thee, to those in sorrow
Comes to bid a sweet good-morrow
To the rough year just awake
In its cradle on the brake.

—From “The Invitation” by Percy Bysshe Shelley

Watching the Nazis march through the Brandenburg Gate in 1933 to celebrate Adolf Hitler’s rise to power, Max Liebermann said "I could not eat as much as I would like to vomit." Born July 20, 1847, Max Liebermann tried to bring the beauty of Impressionism to Germany in works such as Garden to the West of the Wannsee (above, from 1917). Liebermann built a home and garden on Lake Wannsee that served not only as his inspiration but also as a refuge from the turmoil of German society. Too old to fight in World War I and dead in 1935, years before World War II, Liebermann felt the sting of war’s effects all the same, especially the anti-Semitism of the Nazi regime, which forced him to give up his academic post when Jewish artists were forbidden to exhibit any longer. At a time when Expressionism and New Objectivity grabbed the spotlight in German art, Liebermann continued to look for a place in his homeland for Impressionism’s devotion to pure natural beauty. 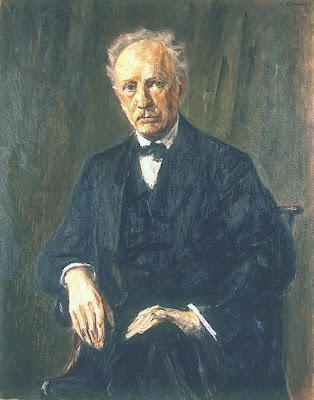 Aside from his beautiful landscapes and seascapes, many of which feature children playing in the surf, Liebermann painted many striking portraits, including a portrait of the classical composer Richard Strauss (above, from 1918). Whereas the landscapes and seascapes follow the brand of Impressionism practiced by Monet and Renoir, Liebermann’s portraits show the influence of Edouard Manet with their dark backgrounds and psychologically astute portrayals. Strauss and Liebermann may have felt an artistic kinship, as both seemed to be behind the artistic times in their chosen fields as they held on to their signature styles as new schools passed them by. There’s a sadness in Strauss’ eyes that may mirror the sadness in Liebermann’s own, as Germany plunged into economic and political chaos in the wake of the punitive reparations imposed after World War I, which served to destabilize the country enough for Nazism to eventually capitalize on the situation. 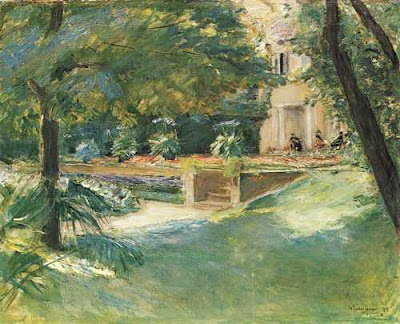 Liebermann’s wife continued to live in their house on the Wannsee after the artist’s death. (Liebermann’s Garden and House in Wannsee is above, from 1918.) Little did she suspect that nearby Nazi leaders conducted in 1942 the infamous Wannsee Conference in which the “Final Solution” to the "Jewish Question" was decided. Hours before officials planned to take her away and add her to the Holocaust’s tally, Martha Liebermann took her own life in that Wannsee home in 1943. Today, the villa where Hitler and his henchmen planned the Holocaust is a center for education, just as the Liebermann home is now a memorial to the man and his art. Max Liebermann always saw the best and the brightest of Germany and captured it in his art, even in the darkest of days.