More Than the Minimum 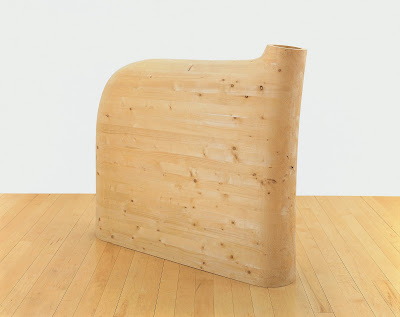 Martin Puryear, American (born 1941). In Sheep's Clothing, 1996. Pine. Des Moines Art Center. Purchased with funds from the Nathan Emory Coffin Collection of the Des Moines Art Center. © 2008 Martin Puryear. Image courtesy McKee Gallery, New York.
“Music is as much about the silence as it is about the notes,” jazz great Miles Davis once said of his pared-down, minimalist style of playing. For Martin Puryear, sculpting is as much about the empty spaces within a sculpture as it is about the sculpture itself. In the catalogue to the current exhibition at the National Gallery of Art in Washington, DC, curator John Elderfield and other essayists try to get at the heart of that silent emptiness within Puryear’s sculptures that speaks volumes not only on multiple cultures but also on the nature of art-making itself. In works such as In Sheep’s Clothing (above), “what seems solid and substantial is hollow, a sort of decoy,” Elderfield writes. Many of Puryear’s works act as Trojan horses, deceiving us into thinking there’s nothing more there than meets the eye before releasing a teeming horde of associations and connections. “Puryear accepts the modernist challenge of Ezra Pound’s ‘Make it new!’ by making it old at the same time,” Elderfield says of Puryear’s coalescing of such disparate elements as African native culture, ornithology, and American history in his work, resulting in not “an imported, assumed primitivism but… an extremely original rediscovery of other, atavistic worlds of flux and transformation.” Puryear’s unique take on Minimalist sculpture carries the maximum load of cultural baggage for us to unpack and sift through. 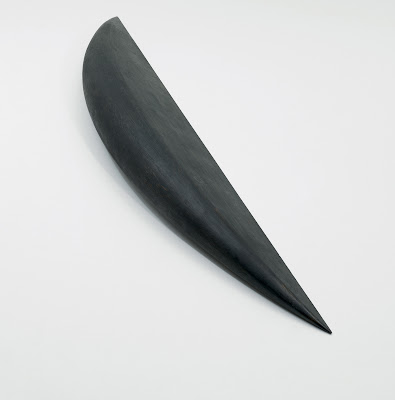 Puryear claims that Minimalism showed him “the power of the simple, single thing as opposed to a full-blown complex array of things.” As Michael Auping’s essay “Artisan” states, Puryear gravitated to Minimalism because its “fundamental, no-nonsense vocabulary of forms fit his practical builder’s personality,” but the Minimalist use of “industrial materials and machine-made processes,” as in the word of Donald Judd and Carl Andre, sent Puryear off in a different direction. Puryear refused, as he put it, to accept “the false premise… that if you work with your hands in a very deliberate way, you somehow cannot be an intellectual.” After learning woodworking from his father as a child and even learning to craft fine guitars in college, Puryear developed the “intelligent hands” needed to employ unique methods of craftsmanship in creating works such as Bask (above). Using the centuries-old method of strip planking once used to build curved ships’ hulls, Puryear created the hull-like shape of Bask. By adding this human touch, which Auping calls “an oblique form of drawing” and a “sculptural version of contour drawing,” Puryear brings a humanity to his Minimalist works that the industrialized versions of Minimalism lack. 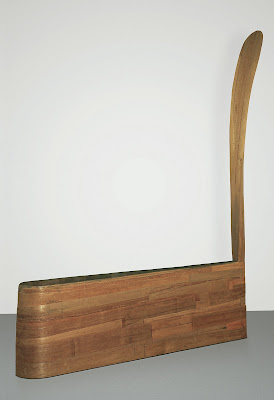 Puryear’s rehumanized Minimalism engages the viewer with a multiplicity of meaning by an economy of means. In a work such as Lever No. 1 (above) we imagine the sculpture actually working as a lever, as if we could raise the weighted element by the long handle. Simultaneously, Lever No. 1 is not a lever but an aesthetically pleasing shape. As Elderfield puts it, Lever No. 1 “is an extraordinarily serene yet strangely discomforting sculpture” that “refuses to settle into its beauty.” Elderfield sees the handle “inviting empathetic leverage to dislodge something familiar but long forgotten.” In all his sculptures, Puryear uses the leverage of an image that is both something and NOT something to pry open a space in which the imagination itself can widen and both reclaim forgotten cultural memories and embrace, perhaps for the first time, treasures of other cultures waiting to be claimed. “By the early 1980s a seasoned viewer of Puryear’s sculptures had come to expect being asked to hold in the mind, at the same time, congruities and inconsistencies—between one view and the next, between settled immobility and implied mobility, between factual presence and metaphorical suggestion,” Elderfield writes. The magic of the NGA’s Puryear exhibition lies in the immersion it provides in this unique language within Puryear’s method—an alien tongue that brings us closer to ourselves through its powerful otherness. 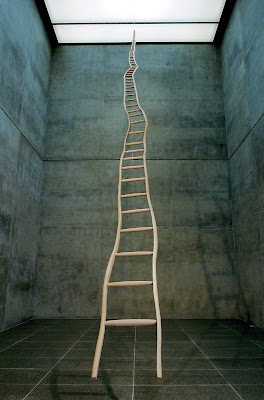 In addition to the multiple physical and metaphorical dimensions in his work, Puryear introduces a historical dimension in works such as Ladder for Booker T. Washington (above). Puryear’s Ladder illustrates the “jogs and switchbacks in the historical continuum that people always want to believe in,” Puryear says. Alluding the civil rights pioneer by its title, Ladder appears taller than it is by a trick of perspective in which the ladder gets narrower as it rises. Some may optimistically see this as the physical manifestation of the heights to which race relations have risen in America. In a recent conversation with Puryear included in the catalogue, Puryear describes Ladder as embodying “the kind of gradual, often illusory notion of upward progress that Washington encouraged blacks to adopt in the nineteenth century against an overwhelming set of obstacles to our advancement.” Aside from that dichotomy of interpretation, Ladder shows Puryear’s ability to assimilate other cultures into an American subject without diminishing them. In her essay titled “Jogs and Switchbacks,” Elizabeth Reede links Puryear’s Ladder with similar ladders in South American, Asian, and African cultures. “Puryear’s strength lies in his ability to absorb unique and unrelated elements... and merge them into something cohesive and original without privileging any one function or form,” Reede argues. By adding historical and cultural references to his sculptures without prioritizing them, Puryear maintains the magical balance that keeps his works Minimalist yet imbues them with an arresting social relevance. 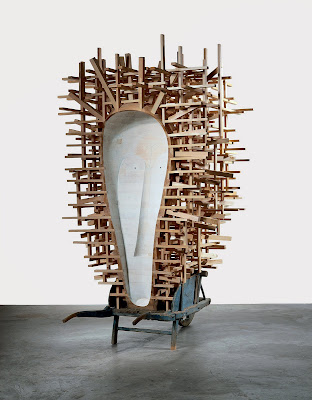 In 1963, Puryear travelled to Sierra Leone as part of the Peace Corps. “One thing that struck me when I was in Sierra Leone,” Puryear says, “was how rich life was for the people there and how much they could do with so few material and technological resources.” As an African-American in an African culture, Puryear connected with the native crafts and found his vocation as a sculptor. “Before I went to West Africa,” Puryear confesses, “I thought of myself as a painter.” In C.F.A.O. (above; which stands for “Compagnie Francaise de l’Afrique Occidentale,” the name of a nineteenth-century French company that traded in West Africa), Puryear presents African culture in the form of an African Fang mask, but simultaneously distances from that culture by enlarging the mask through reproduction. Puryear refuses to fall into the stereotypes of primitivism and nativism, choosing instead to present the thing itself for interpretation. The mask, a means of hidden identity, paradoxically becomes an amplifier of personal identity—specifically Puryear’s own identity as an artist challenging people to see anew rather than hold onto old beliefs. “It is not an argument about something,” Elderfield writes of C.F.A.O. “It is a dare to have courage to look hard at that thing, which means seeing how almost arrantly improper it would be to replace it in a translation.” Puryear plays not “truth or dare” but “truth and dare,” daring us to see these cultural elements unfiltered by our own. In a world getting seemingly smaller by the day as well as more fragile, Martin Puryear’s art may provide the key to accepting the world as it is rather than trying to bend it to our own purposes.

[Many thanks to the National Gallery of Art in Washington, DC for providing me with a review copy of the catalogue to Martin Puryear and for the images from the exhibition.]

All your writing is interesting but this was especially insightful. However, the empty space as radical innovation struck me as ignoring ceramics. This is something that those meager craftsman, you know potters, have been investigating for most of the last half of the last century. I'm a painter and I constantly take crap from my innovative clay working friends that I'm an elitist pig. It would be interesting to read your take on "modern" creamic art in a future issue.
In the meantime I will continue to read and enjoy.
Bob (another one)

Thanks for commenting. It's always great to get some feedback from working artists.

Please leave some room at the elitist trough for me. Unfortunately, I have little knowledge of ceramics but would love to learn more, as always. If your innovative clay working friends have any good books to suggest, please pass them on.

Thanks, again, for reading, Bob.

There is no empty space in Puryears "work", just sterility, ripping off the ideas of others, but cant even get the forms right. Amazing how a guy with so little talent has hung around so long. Now Moores sculptures had those empty spaces, as the sensuality of his forms flowed around them as Miles music did. Miles was NOT minimalist, except in perhaps his cool phase, which he dumped quickly as the white west coasters jumped on it, and turned it into beatnik music. Spare, Spanish, linear, powerful, but listen to Miles Smiles or In a Silent way, not minimalist, but didnt waste anything either. Always get quotes of black guys with Puryear, but he is as white in culture as they come. So few black visual artists have ever truly integrated Africa into their works, always look like ripoffs of ripoffs, copying German Expressionists the bad ones, who often simplified and plagiarized African works. Romare Bearden and one other painter, not Charles White, who never gets recognition the only ones i have seen who melded Africa and European influences in art, as Picasso and to some degree Braque already had. Its amazing how some guys become crtics pets and just wont go away. They will in history, no passion or feel for life in them, all in the head. Which is always a deceptive organ.

To get professional essay you must go for experts like DigitalEssay.net