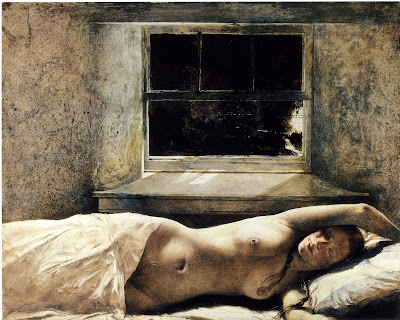 “I knew right away that I wanted this relationship—if it worked—to be a secret,” Andrew Wyeth told Thomas Hoving in an interview in 2002 of his pursuit of his greatest model—Helga Testorf. “Because I didn’t want anyone to know I had fallen deeply in love.” Born July 12, 1917, Andrew Wyeth has deflected questions regarding the nature of his relationship with Helga since the revelation of the paintings in 1986. From 1971 through 1985, Wyeth painted Helga in all seasons, indoors and out, in a series of hideaways beginning with the Kuerner farm so inextricably linked with Wyeth’s art. Helga posed for Overflow (above, from 1978) in the attic of the Kuerner farm house, not far from where Karl Kuerner, Sr., lay dying. A friend recently lent to me his copy of Hoving’s Wyeth on Helga: The Helga Paintings in Andrew Wyeth’s Own Words, an almost forgotten catalogue to a 2006 exhibition of the Helga paintings at the Naples Museum of Art in Florida. Thanks to Wyeth’s long association with Hoving, this interview provides some of the most frank discussions Wyeth has ever offered regarding the Helga paintings. Helga herself chimes in occasionally to add her perspective during the interview. 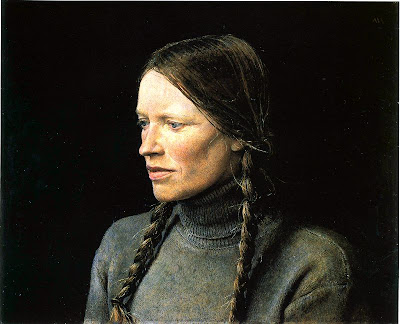 Wyeth reveals that he pursued Helga as a model because of his inability to get the Kuerner girls to pose for him. “I was entranced the instant I saw [Helga],” Wyeth says. “I thought she was the personification of all young Prussian girls and she possessed all the qualities of the Kuerner girls. Amazingly blond, fit, compassionate. I was totally fascinated by her. God, I thought, I have to have her as my next model.” In works such as Braids (above, from 1977), Helga’s “Prussian” quality comes through in an almost chaste love for her stern beauty. If such works as Braids made up the entirety of the Helga suite, Wyeth wouldn’t have to face many questions regarding the nature of the love between him and his model. However, the almost encyclopedic sexuality of works such as Black Velvet (1972), in which Helga poses nude on a sheet of black velvet that accentuates the paleness of her skin, and On Her Knees (1977), in which the title and the depiction approach the pornographic, beg the question—Did they or didn’t they? Because he and Helga were (and still are) both married to other people, Wyeth clearly never wanted the works to be seen by the public until his death, but “mistakenly” exposed them to the world. Only Wyeth knows if it was truly a mistake or a devilish impulse to shake up his world and all those in it, including Helga. 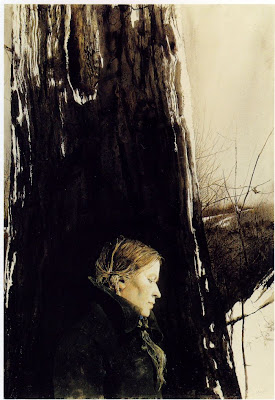 “The heart of the Helga series is that I was trying to unlock my emotions in capturing her essence, in getting her humanity down onto a panel or two,” Wyeth says, almost defensively. One of Helga’s favorites, Refuge (above, from 1985), shows her in a pensive mood, as “the mysterious woman,” Wyeth says. “I’m always misread, all my life,” Helga says of this painting, a complaint that could extend to the entire Helga saga. Until we know more, and we may never know more, even after Wyeth’s death, we can read and misread these paintings forever, finding in them what we guess are Wyeth’s motivations but may only be our own projected qualities or shortcomings. Talking over this revelatory, almost forgotten book with my friend, the biggest Wyeth fan I know, I realized the self-destructive nature of the Wyeth’s relationship with Helga. Perhaps Wyeth wanted to be caught in some illicit love acted out in portraiture (or more) and surprised himself with the ability to keep it under wraps for 15 years. Unable to keep the secret to himself any longer, Wyeth himself betrayed the bond. In that seemingly self-destructive act of exposure, Wyeth literally destroyed his life’s status quo and stepped into an era of uncertainty, which may have been his goal all along.