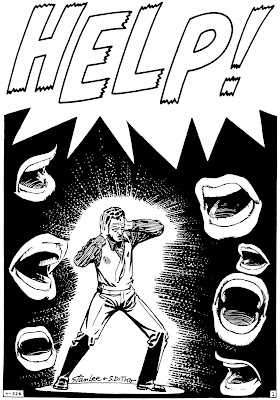 The Beatles or The Rolling Stones? “Funny” Woody Allen or “Serious” Woody Allen? Coke or Pepsi? For many people, such questions trigger endless arguments bordering on warfare. In the world of modern superhero comics, the question for many is Kirby or Ditko? Mark Evanier’s Kirby: King of Comics (reviewed here) fired the first shot for the Kirby-philes, to which Blake Bell’s Strange and Stranger: The World of Steve Ditko responds in a less affectionate, but just as admiring way—a book as conflicted as the artist himself. Bell traces Ditko’s life from his earliest days in Johnstown, Pennsylvania, to his meteoric rise in the comic industry and heyday helping create Spider-Man and other cultural icons, to his essentially turning his back on fame and fortune in the name of philosophical and artistic principle. Today, Ditko still churns out comics in his Times Square studio, living in relative poverty as his characters rake in millions in films and publications. Never once has Ditko cried out “Help!” (as in the stunning, almost Expressionist image above from Strange Tales #94, March 1962) and asked for retribution. A hero in his own mind, Ditko never compromised his principles and always placed the art before the artist, becoming as elusive as Thomas Pynchon for those trying to enter his world. Blake Bell storms Castle Ditko and sheds light into the darkest corners of his art. 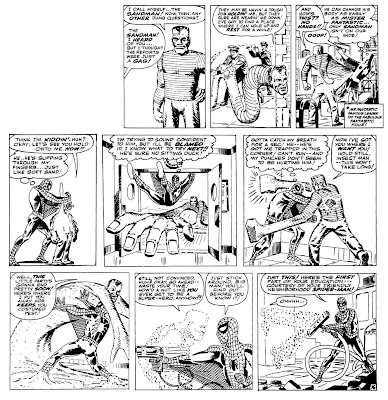 Ditko grew up in the shadow of disaster—the Great 1889 Flood of Johnstown that claimed more than 2,200 lives. Haunted by that memory and facing the financial disaster of the Great Depression, Ditko and his family, like so many of that generation, found solace in the comic adventures of Prince Valiant, Batman, and The Spirit. After serving in World War II, Ditko used the G.I. Bill to study under Batman artist Jerry Robinson in New York City. Ditko took the skills learned under Robinson to a series of studios before landing at Charlton Comics in 1953. Charlton treated comics as “filler” for their other publishing ventures, so Ditko enjoyed full freedom, albeit poor payment, at Charlton before the institution of the Comics Code in 1954. “Ditko reveled in this short-lived freedom,” Bell writes. “His imagery of buzzing electric chairs, dismemberment and death by drowning continued the trend of horror that was garnering such negative attention.” Throughout, Bell uses concrete examples of Ditko’s early art to demonstrate the amazing story-telling techniques of the master. “His use of single design elements, spatial interaction of objects, negative space and spotting of blacks were giving his work a recognizable visual identity,” Bell writes. Bell’s dissection of Ditko provides a primer on the fundamentals of visual storytelling itself. Eventually, Ditko found himself at Marvel Comics working with Stan Lee. Fleshing out Lee’s rough outline, Ditko gave form to Marvel’s greatest character—Spider-Man. “It was Ditko’s ability to expand on Lee’s framework that separated the ‘hero with problems’ motif from being mere repetitious novelty added to flavor a generic superhero book,” Bell says when trying to recapture the revolutionary impact of Spider-Man. Ditko eventually took over the plotting and art of the first few years of Spider-Man, letting his imagination stretch and evolve like the villainous Sandman confronting the hero in Amazing Spider-Man #4 (above, from September 1963). The visual pyrotechnics of Sandman rival anything done by Jack Cole in the acclaimed Plastic Man while simultaneously creating stories that revitalized the comics industry with their relevance to a new, young audience. 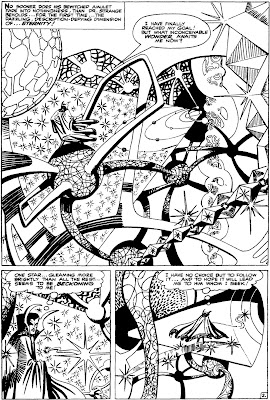 “If Spider-Man set a new standard for superhero comics in narrative depth,” Bell asserts, “Doctor Strange raised the bar for the visualization of dimensions never before seen or imagined.” Ditko’s cosmic capers led many of the Woodstock generation to suspect he shared their love of mind-altering substances. Such suspicions seem reasonable when looking at the almost Dali-esque landscapes (above) Ditko wove entirely from his own consciousness. Ironically, while the hippies sought to claim Ditko as one of them, Ditko sought to separate himself from the prevailing spirit of that age. Already “the most straight-laced man in comics,” Ditko’s personal philosophy took a hard right turn when he embraced the works of Ayn Rand. In Amazing Spider-Man #38, Ditko’s final issue, Spider-Man as Peter Parker confronts a group of college-age protesters, whom Ditko portrays as shiftless and unprincipled. Bell calls this moment “a big ‘middle finger’” to Spider-Man’s core audience, something Marvel took note of when dismissing Ditko. Ditko went back to Charlton and eventually to DC Comics to create a score of Randian heroes such as Captain Atom, Blue Beetle, Hawk and Dove, and The Creeper. The most Randian heroes of all, however, were the pair of The Question and Mister A. “Where other heroes’ powers are based on some accidental super element,” Ditko said, “The Question and Mr. A’s ‘power’ is deliberately knowing what is right, and acting accordingly.” While The Question operated under the Comics Code, Mr. A appeared in magazines outside the code, allowing villains to die with a cold ruthlessness the mainstream industry would never permit. Mr. A answers the questions The Question poses with cold-blooded Randian resolve. Bell truly walks a fine line in praising Ditko the consummate artist and storyteller while simultaneously showing the less attractive aspects of his narratives and the consequences those storylines held for Ditko’s career. 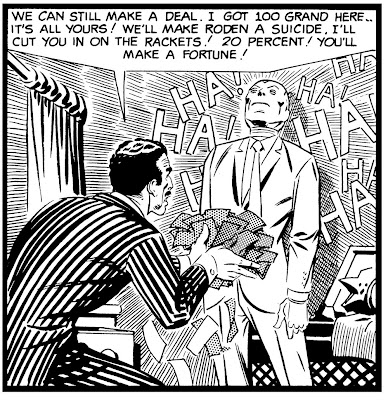 When Ditko drew Mr. A laughing at a bribe attempt in witzend #4 (above, from 1968) he might have just as easily drawn himself laughing at the overtures of the comic industry to bring the talented creator back into the fold. Even when independent, creator-driven comics companies arose in the 1980s, Ditko never found the unfettered freedom he desired for his work. Ditko saw any outside editorial imput as an affront to his principles. Such principles led Ditko to take jobs such as drawing Transformers coloring books in 1983 just for the money. Refusing all forms of altruism—from fans as well as from the industry—thanks to his Objectivist beliefs, Ditko survives on social security and veterans benefits. Always clear-eyed yet admiring, Bell recognizes the toll Ditko’s Randianism took not only on his relations with the comic industry but also on the work itself. “Ultimately, after his initial success in bringing Rand’s tenets to comics in the late 1960s, Ditko’s Objectivist-inspired work became prone to didacticism and repetition, accompanied increasingly by perfunctory artwork,” Bell writes. Ditko turns his characters, once so full-bodied, into “political ciphers” or mouthpieces for Rand’s polemics. Bell provides a sampling of “the lighter side” of Ditko near the end of the book, but there’s no shaking the sad decline of the great artist and storyteller. Fans of Ditko already know his prickly side, and may love him even more for it, but Blake Bell’s Strange and Stranger: The World of Steve Ditko will give even the most devout Ditko-phile pause not only in a reevaluation of the greatness of Ditko’s work but in the recalculation of just how far the mighty have fallen.


[Many thanks to Fantagraphics Books for providing me with a review copy of Blake Bell’s Strange and Stranger: The World of Steve Ditko and for the images above.]

The myth concerning what it is to be an ‘artist’ has developed for centuries. During that span of time the image of ‘the artist‘ has become one of mystery and magic… rebellion and inner struggle-- these myths assume that all artists are born with a power that is not present in other individuals, the ability to cause social change with a single image produced a few waves of the hand, and a sense of vision that goes beyond the physics of natural sight.
-------------------------
Swunderers
Trivia Game Challenge
Trivia Game Challenge

Nice story as for me. I'd like to read something more about this theme.
By the way look at the design I've made myself A level escort