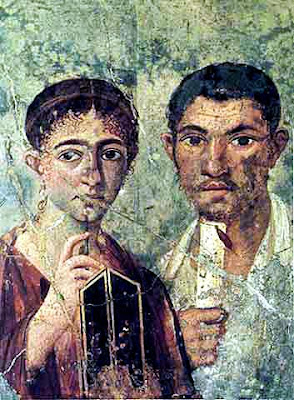 The Italian government has declared the ancient site of Pompeii a disaster area. Destruction comes this time not in the form of volcanic ash from Mount Vesuvius but rather from years of neglect and poor conservationism. For the next year, the Italian government’s newly appointed commissioner will oversee the new conservation effort. Frescoes (one example above) and other artifacts exposed to the elements during the past 260 years of excavations are being destroyed over time. Trash from nearby Naples is actually being dumped near the site, burying it just as cruelly as Vesuvius did in 79 AD. 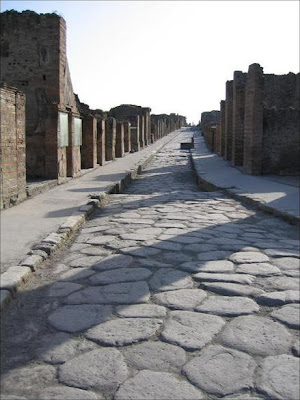 I remember being greatly moved when Annie and I visited Pompeii during our Italian honeymoon. Walking down the streets (above) with the tour guide pointing out the ancient technological wonders, the too-familiar homey touches, and the sexually explicit artwork here and there brought the “dead” city back to life for us. Seeing where bakers and other tradesmen worked each day, including that final day, proved that very little has changed about people in the last two thousand years. Sadly, I have equally clear memories of the many dogs that walked among the ruins of the city begging for scraps from tourists, living in the ancient homes, and polluting the historic scene. After seeing Pompeii in person, I’m still amazed that only two thirds of the city has been uncovered, with another third still buried under Vesuvian ash as it has been for millennia. 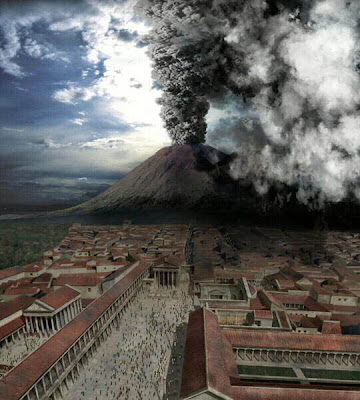 As the article points out, Italy’s flagging economy leaves little money to take care of the many culturally important sites under government supervision. Pompeii’s age and already fragile state made it more susceptible to disrepair than most others, but the disaster area label may soon find its way on other treasures of Italian history. As one commenter pointed out, our best solution may be to rebury the city of Pompeii before our actions do any more irreparable harm. (A computer-generated image of the 79 AD disaster appears above.) As horrific as the prospect of another eruption of Mount Vesuvius sounds, especially to the highly populated areas around Naples, it may be the only chance of saving what remains of the lost city of Pompeii.

A Volcano in Iceland sent a plume of ash over﻿ northern Europe and grounded aircraft indefinitely.