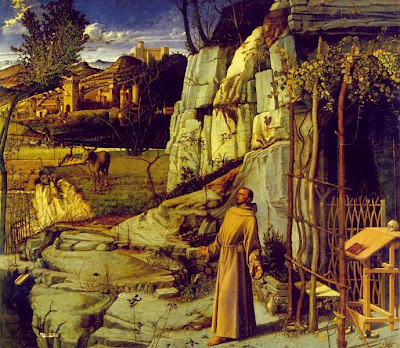 While others stoked the fires of the Italian Renaissance in Florence and Rome, Giovanni Bellini set the early standard in Venice until his death on November 29, 1516. Born 1430, Bellini introduced a sensuality and warmth to the religious standards that had become cold and stale over time. His painting of St. Francis in Ecstasy (above, from 1480) places the world-renouncing saint within a beautiful panorama of nature. Although St. Francis of Assisi is shown at the moment of highest communion with the divine, God never “shows his face” in this painting, except in the details of his creation all around Francis. St. Francis almost becomes dwarfed in the larger scheme of nature here, downplaying him and, by extension, all humanity in contrast to the bigger picture of all of creation. Bellini thus gives new life to a familiar standard of religious iconography and actually manages to recreate the original spirit of St. Francis himself, who strove to become attuned to nature and use it as another pathway to God. 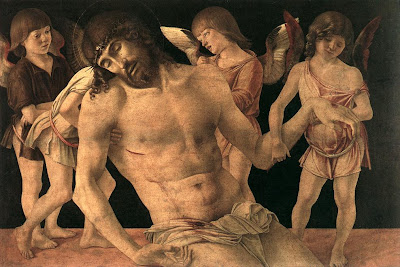 One of the dangers of looking through religious art of Renaissance Europe is becoming numb to the similarities not only between works by the same artist but works on the same theme by different artists. All those crucifixions and pietas quickly blur together. That sameness makes the difference of Bellini’s Dead Christ Supported by Angels (Pietà) (above, from 1474) all the more surprising and enjoyable. Bellini’s introduction of angels isn’t new or unique, of course, but he took that twist and twisted it even further, giving the individual angels personality beyond that of stock figure cherubs attending the fallen Christ. The expression on the face of the angel furthest to the right as he muses upon the wound piercing Christ’s left hand captures perfectly the mixture of melancholy and mystery the pieta was designed to invoke in the viewer. You can almost read the psychology on the faces of the other angels depicting an entire range of intensity yet still operating within that same emotional framework. 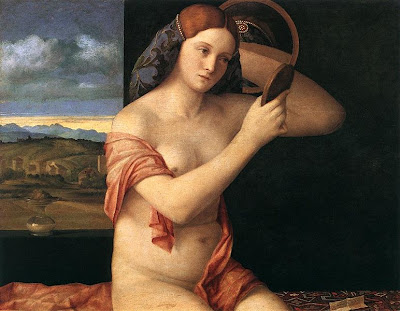 When Albrecht Dürer visited Venice in 1506 he hailed the 76-year-old Bellini as still the best painter in the city. Bellini drew around him a circle of followers and students, including Giorgione and Titian, who would continue and extend Bellini’s ideas of color and ideal of injecting the personal into public works. As the times changed, Bellini allowed himself to change with them right up to the end. At the age of 85, Bellini painted his first nude female, Naked Young Woman in Front of the Mirror (above, from 1515). Perhaps Bellini had Giorgione’s Sleeping Venus in mind when painting his homage to the female form. Perhaps the freedom to break barriers that Bellini instilled in his students came back to him and freed him in return. Whereas Giorgione “legitimized” his nude with a mythological reference, Bellini’s work shows no bowing to convention. To the end, Bellini believed in the beauty of God’s creation, including that of the human body, as the greatest expression of divine power and, most importantly, divine love.