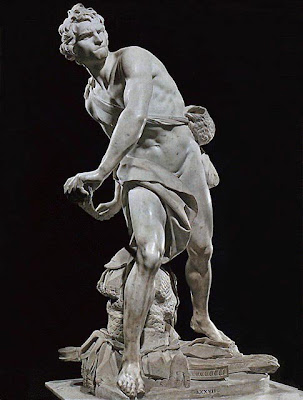 When Gian Lorenzo Bernini began sculpting his David (above) in 1623, he must have felt like the Biblical David standing there in the Valley of Elah facing down the Goliaths of the Renaissance. Born December 7, 1598, Bernini and the rest of the Baroque generation worked in the shadow of Michelangelo et al. As Bernini chipped away at the marble, images of Donatello’s David of the 1440s, Verrocchio’s David of 1473-1475, and, standing tallest of all, Michelangelo’s David of 1501-1504 had to have been in his mind. Donatello and Verrocchio chose to show David victorious, standing over the decapitated head of his vanquished foe. Michelangelo showed David measuring up the competition and summoning up the courage to fight. Bernini daringly chooses to show the moment of action itself, when David rears back to sling the fateful stone. David’s mouth tenses in the moment of concentration, a beautifully realistic, natural touch that humanizes the mythic young shepherd. Where his predecessors posed the young hero, Bernini springs him into action. By sculpting his David, Bernini threw down the gauntlet at the feet of the greats of the past and announced himself as a worthy challenger to the title of greatest sculptor of his time. 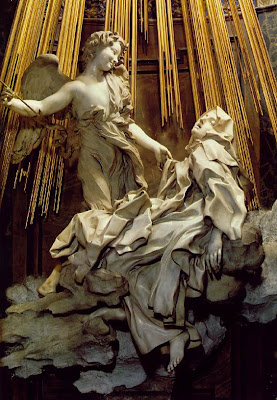 From the time he came to Rome with his father at the age of seven, Bernini knew he would be a great artist someday. The painter Annibale Carracci first recognized Bernini’s blooming talent and clued Pope Paul V and other potential patrons in on the next great thing. Bernini’s promise soon flowered into realized works of art that revolutionized sculpture with their drama and breathtaking realism. The Ecstasy of St. Theresa (above, from 1647-1652) added a whole new dimension to religious art—sex. The expression on St. Theresa of Avila’s face is purely orgasmic as the presence of God literally pierces her soul. The young angel beside St. Theresa seems more like Cupid with his arrow of love than a messenger of God. It’s truly amazing the level of sensuousness Bernini achieves in the drapery of the saint’s robes and how they ebb and flow around her body, as if they conducted the euphoric electricity emanating from her. I’ve never had the pleasure of seeing this sculpture in person, but just judging from photographs of it in place in the Santa Maria della Vittoria in Rome, the sexiness of the sculpture set in a church might make me blush.

Bernini’s monument to Blessed Ludovica Albertoni (above, from 1671-1674) in the chapel of the San Francesco a Ripa in Rome repeats the ecstasy of St. Theresa years later but actually amplifies the sexual component. The life-size sculpture shows Ludovica Albertoni on her deathbed, simultaneously suffering the final pangs before death and enjoying the first stirrings of divine acceptance. Again, religious ecstasy bears a great resemblance to sexual orgasm. By placing Ludovica on a bed, the implication becomes even clearer. Ludovica looks like any one of several Roman or Greek goddesses enjoying the caresses of another diety. Beneath a mountain of sculpted robes, Bernini reveals naked physical and spiritual pleasure. As with the drapery around St. Theresa, Ludovica’s robes seem vibrantly alive, quivering with the pleasure she is feeling. As with his David, Bernini depicts his figure in a moment of action, a moment of becoming. David throws the stone and is transformed from simple shepherd to prophet and king. St. Theresa and Ludovica accept the hand of God upon them and are transformed into saints. By showing these individuals at the moment of transformation, Bernini transforms sculpture and transformed himself from a prodigy of great promise into an artist who could take on all comers.
Posted by Bob at 12:01 AM