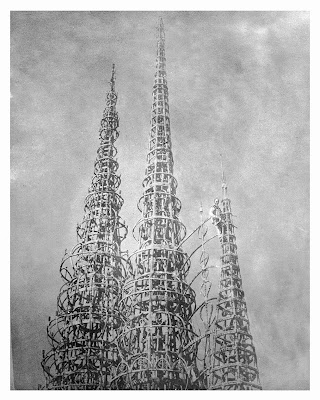 “You be half good and half no good, well, that's no good,” muses Sam Rodia, builder of the famous (and to some, infamous) Watts Towers, the subject of Edward Landler and Brad Byer’s documentary film, I Build the Tower. (The International House in Philadelphia will be hosting a screening of I Build the Tower on Thursday, December 11 at 7 pm, followed by a conversation with architect/artist David Slovic and art critic/curator Judith E. Stein.) From the 1920s through the 1950s, Rodia (shown above, perched on the towers around 1950) built a series of towers on his small plot of land in Watts using steel and concrete and decorated them with shards of pottery, sea shells, and other found objects. Rodia, also known sometimes as “Simon,” could never do anything halfway—“half good and half no good”—and literally took his towers to the extreme, with the highest rising almost 100 feet above the ground. Landler and Byer take the memory of Rodia, preserved beautifully in earlier documentary footage and recordings, and demonstrate how the Watts Towers, the brainchild of an opera-loving Italian immigrant, became an integral part of the African-American Watts culture of jazz and hip hop that developed around it. “Rodia refused to give the towers any meaning,” one commentator says, but Landler and Byer present the meaning that the towers have assumed as they took on a life of their own. 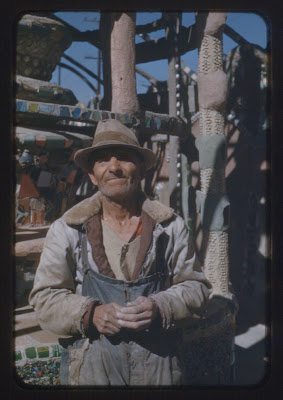 Born in 1879 in one of the poorest sections of Southern Italy, Rodia explained that his journey to America at the age of fourteen was his parents’ “fault.” Making his way in the New World by his wits and natural intelligence, Rodia learned multiple trades, including masonry, brick laying, and tile laying. These skills became the foundation upon which the towers were built years later. Rodia eventually made it to California and began a family in the San Francisco area. Sadly, Rodia’s alcoholism led to his divorce in 1912, after which he traveled to South and Central America and all over the United States working odd jobs. In 1919, Rodia recognizes how he’s misspent his youth and quits drinking and smoking. Soon, the towers occupy all of Rodia’s compulsiveness. Rodia chose Watts over another location because more people lived in Watts at the time. The other location soon increased in population as it skyrocketed in fame—Beverly Hills. Buying cement at 20 cents a sack and steel at $14 per ton, the 100-pound Rodia carried these materials up the towers nights after working his day job as a mason, on the weekends, and even on holidays. The filmmakers connect the tall wooden towers of the Italian religious processions of Rodia’s childhood to the design of the towers themselves. A prow-like section of the tower base resembles the ship that carried Rodia to his destiny in America. Throughout, Rodia and the towers (shown together above in a 1953 photo by Jay Weynn) become almost inseparable in the mind of the viewer. 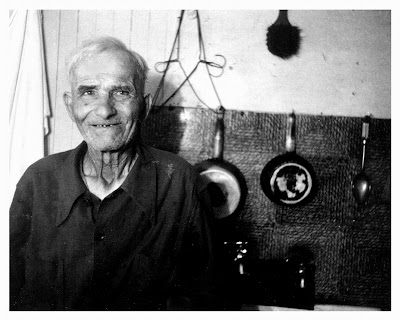 What really makes the film soar is the unforgettable presence of Rodia himself thanks to archival footage of the sculptor made in the late 1950s when researchers tracked Rodia down to his new home in Martinez, California. (A 1960 photo by Nicholas King of Rodia in his apartment appears above.) Rodia intones pronouncements like a Biblical prophet crying in the American wilderness. “Thomas Jefferson, he wrote the Constitution in the United States,” Rodia intones, “and they don’t use it.” Listening to Rodia rail on about the injustice of multiple taxation, you mourn that he died before talk radio hit the airwaves. “The world is money,” Rodia offers at one point. “No matter who you are, what you are, you ain’t got a dollar in the pocket, you in the hole.” Money and economics dominated much of Rodia’s thinking, but he’s much sharper and logical than your typical geezer on a rant stereotype. R. Buckminster Fuller, all polished and pressed, appears as an anti-Rodia of sorts to comment on Rodia, whom Fuller feels will be eventually considered one of the great sculptors of his time. By placing Fuller and Rodia side by side, as it were, the filmmakers illustrate wonderfully how outward appearances can be deceiving on the grandest of scales.

“I build the tower,” Rodia once said, providing the title for the film, “the people like, everybody come.” Landler and Byer incorporated those words and others into a rap song that opens the film, linking from the very beginning Rodia’s sculpture of the near past with the vital community that has embraced the eccentric artist and his towers as part of their multifaceted heritage. Rodia worked with “an insanity that we all need,” says one of the artists supporting the Watts Tower Arts Center, which stands in the shadow of the towers and sponsors music festivals and other community events. Jazz great Charles Mingus recalled in his autobiography Beneath the Underdog what it was like to grow up in Watts and look at the towers each day. Looking at the young faces upturned to those same towers in I Build the Tower, you wonder which of them will also be inspired to great things. From the amazingly cohesive soundtrack of Verdi, hip hop, and jazz to the beautiful images of the tower itself set against a brilliant blue sky, I Build the Tower will fill you with the joy and energy of the memory of an unconventional man and his unconventional achievement and, perhaps, inspire you to build your own tower of individuality.


[Many thanks to Bench Movies for providing me with a review copy of I Build the Tower and for the images above. The International House in Philadelphia will be hosting a screening of I Build the Tower on Thursday, December 11 at 7 pm, followed by a conversation with architect/artist David Slovic and art critic/curator Judith E. Stein.]
Posted by Bob at 12:01 AM