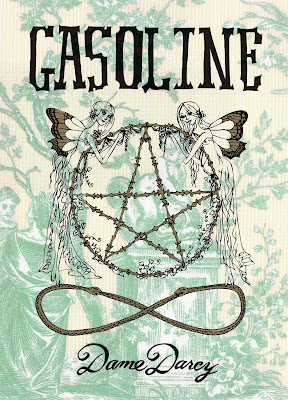 When Al Gore wrote An Inconvenient Truth, he most likely never envisioned his ecological ideas spawning a stepchild such as Dame Darcy’s Gasoline: A Graphic Novel. Billed as “a post-apocalyptic world inhabited by faeries, pirate lasses, zombie sailors, mermaids, arrow-splitting prarie dogs, Native American trackers, and plenty of good witches!”, Gasoline brings Dame Darcy’s unique take on the world’s addiction to fossil fuels to the public in weirdly wonderful words and imaginatively inventive illustrations. Illustrator, writer, fine artist, musician, filmmaker, and animator, Dame Darcy, best known for her comic Meatcake, also offers a soundtrack to Gasoline with her group Death by Doll and is currently adapting Gasoline for film. (Gasoline: The Cookbook and Gasoline for Wii aren’t ready yet, I guess.) As fellow comics artist Gilbert Hernandez says of Dame Darcy: “Love and imagination and a little madness (in the best sense of the word) inform her highly original and eccentric comics.” By definition, any statement about Dame Darcy can only be an understatement. She is a force that must be experienced to be believed, and Gasoline delivers a high-octane dose. 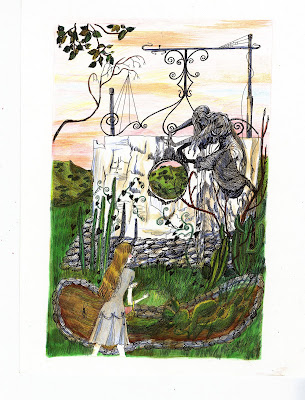 Gasoline follows the path of the Armbuster family as they scavenge gasoline from the ravaged landscape and explore alternative fuels and means of transportation, specifically an electric car. The leader of the Armbuster pack is Amity, the Queen Witch, and wife of King Witch, Dain. Amity serves as a doppelganger for Dame Darcy herself. “She was currently writing her songs, music, and combination dialogue-spell-prayer, as well as embroidering a white velvet knight’s tunic with fleurs-de-lis,” Darcy writes of a typical day for Amity (shown above multitasking in her garden). Gasoline sets up a clear opposition between the Armbusters and their archenemies, the Nihilists, who “are one with the darkness and evil that consumed Earth.” Darcy’s artistic utopia centers on the Armbusters. “Everyone in the community was an artisan, a craftsperson who fused socialism with nostalgia,” Darcy writes of her Arts and Crafts Movement gone nuclear in creative energy. In this respect, Darcy channels William Morris in her belief that art can truly change the world for the better. In Meatcake, Darcy generates a Victorian era atmosphere, and Gasoline follows suit with an apocalyptic future superimposed on that Victorian past. 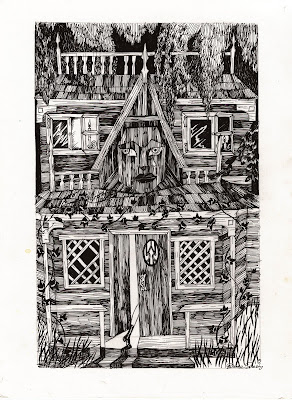 The variety of characters Darcy introduces is as dizzying as the story itself. Imagine Gulliver’s Travels on fast forward, or an even more uninhibited Lewis Carroll. The illustrations to the text more than keep pace with the words. The illustration of a house with a face (above) perfectly combines the naïve style Darcy strives to maintain with the sophisticated sense of design and execution. It’s not easy to make adult literature look like children’s literature, but Dame Darcy maintains the magic while keeping an eye on the serious issues of the environment and the need to pursue alternative means of energy. It’s easy to dismiss Dame Darcy and her whole world woven of bits and pieces of fable and myth as a lot of New Age zaniness, but perhaps it takes such an alternative view of the world to get at the heart of the world’s problems. Al Gore never seemed as cool as when he talked passionately about global warming. 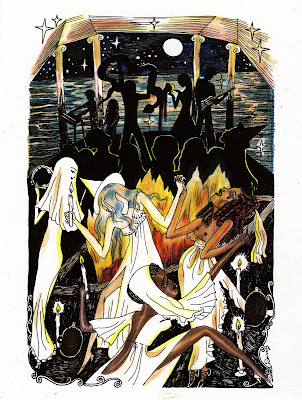 The marriage of Dame Darcy’s writing with her illustrations made me think of what William Blake would have been like as a woman. Darcy conducts the same restless energy that Blake did in his poetry and designs, but charges it with her uniquely feminist power. When Amity presides over a raucous voodoo ritual (above) that mixes the twenty-third psalm, snake handling, rooster sacrifice, and tribal dancing, Dame Darcy concocts her own private religion with woman as the central doctrine: “The Black Madonna, the human symbol of the primal goddess from whom all life originated, the embodiment of Mother Nature; she who had been there when women had been robbed of their birthright to power through intuitiveness and nature; the vessel and the giver of life, the conduit from the ether to this Earth.” You don’t fool with Dame Darcy’s Mother Nature. This all-inclusive “religion,” for lack of a better word, achieves a primal sense of imperativeness when it comes to ecology and just how high the stakes are for humankind. 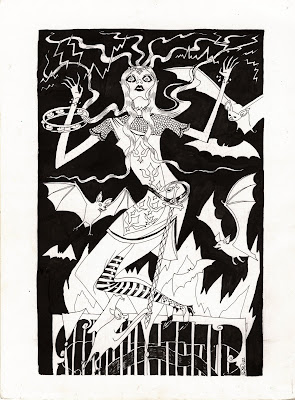 “Boredom is the source of evil,” says one of the characters in Gasoline, which is many things, but never boring. When Amity dons a Joan of Arc costume (above), you truly get a sense that she, and by extension, Dame Darcy, are on a mission from God, or the gods. Darcy gets her most Blakean in a final coda featuring an illustrated single-page poem titled “Atom,” which puns on Adam and Eve. “The human race,” Darcy writes, “perceived/ their being/ and each other/ an alien universe/ unconnected/ with the source/ The Mother.” Gasoline will reconnect you with your wild side, your feminine side, and sides you never imagined you had, all while opening your eyes to an abundance of imagination and creativity. Like all utopias, Dame Darcy’s is unattainable, of course, but that never makes it less attractive or less an ideal to strive towards. In the eighteenth century, William Blake toiled in relative obscurity, a victim of closed minds that could never admit his uniqueness into their consciousness for a single second. In Gasoline, Dame Darcy asks us for a moment of our time with the promise of eternity, if not an eternal fuel source, in a single hour of reading.

[Many thanks to Merrell Publishers for providing me with a review copy of Dame Darcy’s Gasoline: A Graphic Novel and for the images above.]
Posted by Bob at 12:01 AM