The God of War 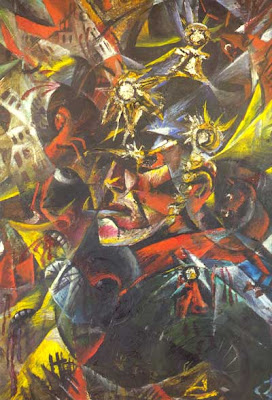 Of all the artists who served in World War I, Otto Dix may have seen the most bloodshed. Born December 2, 1891, Dix actually volunteered for service out of a sense of fervent nationalism. As part of a machine gun unit, Dix fought at the Battle of the Somme in France before being pulled to the Russian front in 1917. As the war wound down, the German military pulled Dix back to the Western front to participate in the last-gasp Spring Offensive that marked the beginning of the end of the war. Along the way, Dix earned an Iron Cross and many serious wounds. In 1915, Dix painted Self-Portrait as Mars (above). In a tangled, almost Futurist composition, Dix assumes the role of the Roman god of war, perhaps reveling in his role in the German army, crouched behind a machine gun and dealing death. It’s hard to judge when Dix’s enthusiasm for warfare gave way to the realization of the human cost. The fact that Dix paints in a Futurist style makes me believe that he shared in their naïve lust for action, but the way Dix obscures his face in that style also makes me wonder if he was beginning to see the depersonalizing effects of mechanized mass murder. 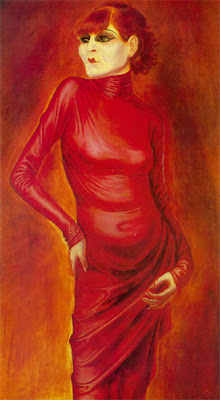 After the war, Dix, along with George Grosz and other artist veterans, promoted a harsh style that cast a bright light on post-war, Weimar Germany known as Neue Sachlichkeit or the New Objectivity. Dix’s Portrait of the Dancer Anita Berber (above, from 1925) shows in garish red the highly sensual, spiritually void world of German society between the wars. For Dix, the greatest injustice always remained the abandonment of World War I veterans after the war. Physically and mentally crippled, these veterans found themselves abandoned by society, an inconvenient reminder of the war years and the diminished stature of Germany. Dix often examined the idea of Lustmord, or sexual murder, recognizing a similarity between sexual perversion and the thrill to kill. For Dix, the decadence of the post-war years simply redefined a deep-seated need that the war’s bloodshed couldn’t answer. 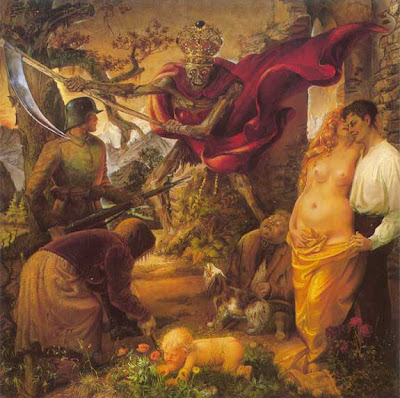 When the Nazis assumed power in the early 1930s as the German people sought something to fill their spiritual void, Dix certainly recognized another war looming on the horizon. In 1934, Dix painted The Triumph of Death (above), in which a crowned, skeletal figure personifying death wields a scythe over other characters in an allegory of Germany on the brink of war. On the left, closest to the scythe’s blade, a common German soldier stands with the same pride Dix exhibited before the First World War, oblivious of the cost he will be asked to pay. An innocent child plays in the flowers in the foreground, also oblivious to its sad fate. On the right, an almost nude seductress caresses her lover, continuing Dix’s fascination with the connection between the sex drive and the impulse to destroy. The lovers are decadent rather than procreative, emptily sensual rather than soul mates. The Nazis recognized Dix’s opposition and counted him among the “Degenerate Art” artists in 1937, a final slap in the face for the decorated war veteran. The lessons of Dix’s paintings went unheeded by the Nazis, who were determined to learn them firsthand.
Posted by Bob at 12:01 AM