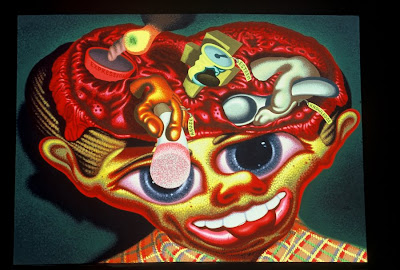 In the 1953 film The Wild One, someone asks Marlon Brando’s character, a rough motorcycle gang leader, “What are you rebelling against?” Brando snarls back, “Whattya got?” Similarly, Peter Saul never met a idea he couldn’t rebel against in his art. In a retrospective exhibition currently at the Pennsylvania Academy of the Fine Arts, the motivations of this original maverick are examined. “Considering how much American art over the past two decades has been devoted to dissecting the dark underbelly of the beached American dream,” writes Dan Cameron in his essay “Front Row Seats in Hell” in the exhibition catalogue, “one might even be excused for thinking that Saul is one of the quintessential U.S. painters of the past 50 years, as egregiously underrated as he is pathologically incorrigible.” Saul’s incorrigibility blankets over his ability as both an artist and a social commentator. In a work such as Self (above, from 1987), Saul cracks open his own cranium to reveal the conflicting forces within. “Expression (a firecracker) and Abuse (a lit cigarette) seem to be in a perpetual standoff with Knowledge (a soup spoon) and Esteem (a condom nailed to a cross),” Cameron writes of Self. Fearful of falling into what Saul calls “that giant pit of so-called truth, good intentions, and responsible attitude,” the artist maintains a uneasy alliance with his own head while picking through modern systems of belief and refusing to buy into any of them. 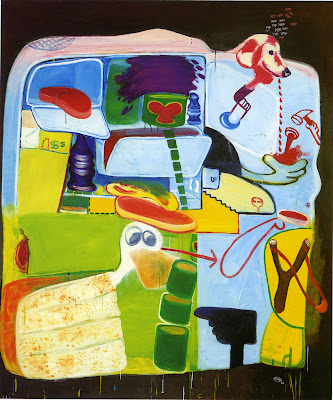 The first modern system of belief Saul strikes out at is consumerism in works such as Icebox Number 7 (above). The Icebox series offers “compendiums of aggressive consumer madness,” writes Michael Duncan in “The Spectacular Wrath of Saul: Peter Saul’s History Paintings.” Duncan places Saul within the larger tradition of history painting kicking and screaming, just the way Saul would prefer. Saul paints the Icebox series just after returning to America after living in Holland and Paris. As Cameron points out, Saul not only leaves Europe itself behind but also European style itself. Upon Saul’s return, he adopts “a more slickly hard-edged, hyper-American technique” that “successfully fused the distorted angst of Francis Bacon with the aerodynamic sleekness of H.C. Westermann.” Once Saul set his sights on America as his main subject, the possibilities seemed endless, especially since he attacks every side of every issue. Although Saul is personally more liberal than conservative, Cameron believes, “what appears to motivate Saul more than rage is indignation over the hypocrisy of American liberals.” For Saul, liberals can never be liberal enough as they always cling to some ideology. Saul seeks and ideology-free zone, which may be impossible but remains the only climate his conscience can survive in.

Peter Saul, Columbus Discovers America, 1992-95; Acrylic and oil on canvas 96 x 120 inches (243.8 x 304.8 cm); Levy Family Collection, Dallas.
When it came to history painting, Saul first thought locally, then globally. Living in California in the 1960s, during the draconian governorship of Ronald Reagan, Saul depicted Reagan and his policies with “scatological vehemence” in works such as Government of California, according to Cameron. Saul also protested the Vietnam War, while simultaneously depicting the war crimes of American soldiers. “There are no heroes in his paintings, no victories, no coronations, no causes for inspiration or spiritual uplift,” Duncan writes of Saul’s unique brand of history painting. Some of Saul’s take on modern society’s accepted level of madness comes from the sensibility and visual style of Mad Magazine, especially the art of Basil Wolverton. The relentless irreverence of Mad Magazine, aimed at an “immature” audience, informs Saul’s work in that he refuses to grow up if that means growing comfortable with injustice in any form, especially passive acceptance. “I feel completely relaxed in rebellion,” Saul tells Robert Storr in the extended interview in the catalogue. In works such as Columbus Discovers America (above), Saul “has developed a style dedicated to the dystopian reversal of all ideals—a comic-book grand manner,” Duncan believes. For those growing up on the rebellion of comic books and their “ugly” style, Saul’s work reveals a whole new way of seeing the world as an adult through the eyes of a perpetually angry young man. 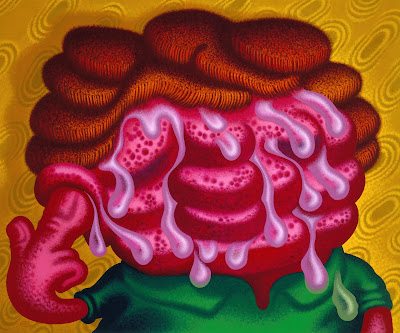 Saul, of course, is no longer a young man. Cold Sweat (above) shows an aging figure coming to terms with the limits of his physicality. As Cameron points out, Cold Sweat presents “the eruption of the body’s interior fluids as a problem in social etiquette for those who are viewing from the outside, while discounting the genuine agony of the poor aging slob who cannot control the workings of his own body.” Similarly, Saul’s work remains uncomfortable for everyone, including himself in terms of a failure to achieve much recognition in the art world. “The professional art world seemed to me like working in an office building,” Saul says of his early days and his choice to buck the system. Works such as Double de Kooning Ducks and Donald Duck on Toilet Descending a Soft Watch spoof, respectively, Willem de Kooning, Walt Disney, Marcel Duchamp, and Salvador Dali, just a few of the art history targets Saul set his sights on. Saul never asks for acceptance by the art world, knowing that none would be coming and not really wanting it if it did. By adopting a brightly colored, cartoonish style, Saul circumvents all art world apparatus and speaks directly to the viewer, which, as Cameron writes, “is another way of saying to the critical establishment that while [Saul] may care about its judgments, he will always behave as if he has risen above them.” Saul prefers to sweat out the judgment of history, bathing in the knowledge that he remained true to himself throughout.

Peter Saul, Bush at Abu Ghraib, 2006; Acrylic on canvas 78 x 90 inches (198.1 x 228.6 cm); Hall Collection.
“There’s a tremendous need to be not seen as a racist, not seen as a sexist,” Saul tells Storr. “So I want to make sure I am seen as those things.” Even in his seventies, Saul still steps on toes. Bush at Abu Ghraib (above), reminds us “that nothing that can be summoned from the dregs of the individual creative imagination is anywhere near as terrible as the actual horrors taking place right now, in our name, somewhere on the opposite side of the planet.” Saul paints “ugly,” but in the “ugly” tradition of Goya, William Hogarth, William Blake, and others who step outside of the parameters of acceptance to reject a world. Dan Cameron, Michael Duncan, and Robert Storr’s Peter Saul and the accompanying exhibition introduce us to an artist who has been under our noses all along, saying all the things we should have been saying, and quietly waiting for a moment of understanding if not acceptance on his own terms and not those of the art world or society at large. This catalogue and exhibition are as much a blessing and a gift upon us as they are upon Saul, the real original maverick.

[Many thanks to the Pennsylvania Academy of the Fine Arts for providing me with a review copy of Dan Cameron, Michael Duncan, and Robert Storr’s Peter Saul and for the images above from the exhibition.]
Posted by Bob at 12:01 AM