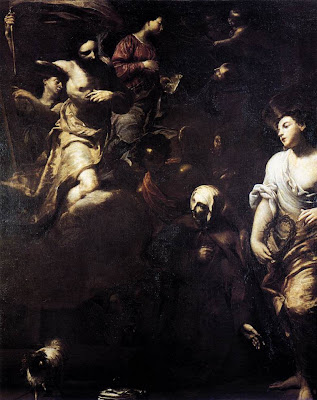 One of the true stars of the Getty Museum’s exhibition Captured Emotions: Baroque Painting in Bologna, 1575-1725 (my review of the catalogue here) was the artist who comes almost at the end of that movement—Giuseppe Maria Crespi. Born March 16, 1665, Crespi earned the nickname "Lo Spagnolo" or “The Spanish One” for his penchant for wearing the tight Spanish-style clothing of the time despite living in Italy. This eclectic edge of Crespi’s extended to his magpie borrowings from other artists such as Caravaggio. Like the rest of the Bolognese School begun by Ludovico Carracci and his cousins Annibale and Agostino Carracci decades before, Crespi envied the powerful chiaroscuro of Caravaggio and emulated it in works such as The Ecstasy of St. Margaret of Cortona (above, from 1701). Out of the inky blackness the faces of Margaret and Jesus leap out as if surfacing from a great depth of water. Following the tenets of the Carraccis and distancing himself from Caravaggio’s relentless realism, Crespi plays up the emotional impact of the scene at the expense of realism, thus escaping the label of Carravaggisti slapped on so many other artists of the time. 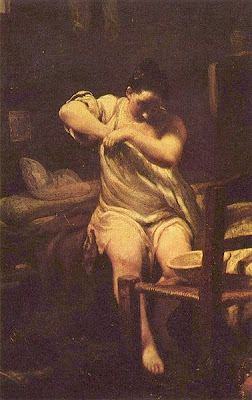 Ironically, from that rejection of realism, Crespi soon moved on to a new emphasis on realism. Continuing to work in dark tones, Crespi entered the bedroom of an unsuspecting young woman in The Flea (above, from 1709). We catch the young lady desperately pursuing an aggravating flea feasting upon her flesh. The bedbugs certainly do bite in the squalor of her surroundings, which Crespi paints faithfully. Crespi knew the work of Rembrandt and even made etchings after some of Rembrandt’s paintings, so the connection between Rembrandt’s homely genre scenes of women in the home and Crespi’s is clear. What is especially remarkable about Crespi is his ability to depict such a scene without descending into caricature or mockery. Anyone who’s suffered a bug bite can identify with the woman’s plight, which provides an entrance through which further empathy allows one to explore the poverty of her situation. Crespi paints genre scenes that moralize without being moralistic. 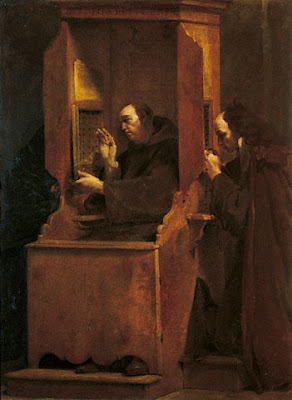 In 1712, Crespi painted a series of paintings realistically depicting how the Seven Sacraments of the Catholic Church were performed. (All seven sacramental paintings can be seen here.) In Confession (above, from 1712), a priest hears the confession of a penitent kneeling to his right as another penitent waits on his left. Above the priests head is a mounted piece of paper half hidden in shadow that lists the sins that the priest was not allowed to absolve but had to refer the penitent to a cardinal or even the pope, depending on the severity. In the Seven Sacraments, Crespi unites religious painting with genre painting and elevates the life of the simple believer practicing his or her faith to the level of a saint in the throes of spiritual ecstasy. There’s a great warmth and humanity to these paintings of the sacrament that gives us a glimpse at the human side of religious life rarely seen and even contemplated when thinking of the great monuments and art of the Renaissance that have passed down to us. Crespi’s vast humanism, his willingness to embrace other cultures and styles and make them his own, allowed him to create images of great feeling that even Rembrandt would be proud of.
Posted by Bob at 12:01 AM