Half in Love With Death

Darkling I listen; and, for many a time
I have been half in love with easeful Death,
Call’d him soft names in many a mused rhyme,
To take into the air my quiet breath;
Now more than ever seems it rich to die,
To cease upon the midnight with no pain,
While thou art pouring forth thy soul abroad
In such an ecstasy!
Still wouldst thou sing, and I have ears in vain—
To thy high requiem become a sod.

—From Ode to a Nightingale by John Keats

Of all the Symbolist painters, Ferdinand Hodler may be the most subtle, and the most fascinating. Born March 14, 1853, Hodler’s Symbolism troubles us in how long it lingers in the world of reality, which makes his elements of unreality that much more memorable. In Night (above, from 1889-1890), Hodler paints himself awakened by a ominous dark figure that is night or death personified. The other men asleep around the central figure are self-portraits as well, two of whom are entangled with the nude bodies of the two women Hodler was romantically entangled with at the time. Hodler lays his whole life literally bare here, especially his complicated love life, while mixing in his personal fascination with death. Love and sex represent life as the counterpoint to death itself. Perhaps Hodler felt that it was this ultimate deadline that made the desire for human contact all the more urgent. Sadly, the realism of Hodler’s nudes in this unreal scene led the city of Geneva to ban the painting as obscene. Hodler later exhibited Night in Paris, where Puvis de Chavannes and Rodin admired and recognized a kindred spirit in Hodler. Night helped launch Hodler as a new and very different kind of artist. 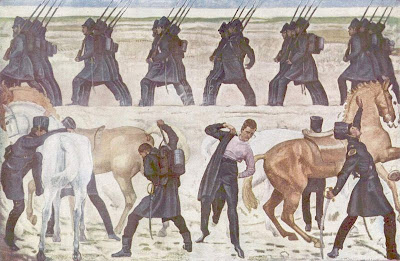 Although born in Switzerland, Hodler’s greatest success most often came overseas, first in Paris and later in Austria and Germany. Jena University commissioned Hodler to paint a large wall painting to commemorate the memory of Jena students volunteering to fight against Napoleon in 1813. Students of Jena Marching to War (above, from 1908-1909) shows young men going off to war with no romanticizing. They accept the need to die in order that their land would be free of oppression. Like many other Symbolist works, Students of Jena Marching to War helped create the Aryan ideal that the Nazis would later co-opt in their rise to power. Oddly, Hodler himself was a pacifist, and even denounced in 1914 the atrocities committed by the German armies in World War I. Unfortunately, the implications of this work, as well as other works by Hodler celebrating the rugged individual, grew out of his control as others read new meanings to suit their purposes, especially after Hodler’s death in 1918. Students of Jena eventually came to symbolize for many the fight against tyranny, including Nazi tyranny, and was removed by the Nazis during World War II. It languished in storage, thought by many to have been lost forever, until it was restored in 1960. 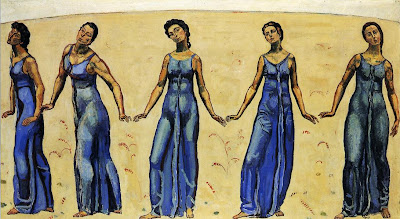 Many of the ideals and ideas of Hodler’s Symbolism remain attractive today. A work such as View into Infinity (above, from 1916) celebrates the vital energy of womanhood and how the female life force could be a means through which humanity could regain a sense of harmony with nature. A woman’s role in the cycle of birth and death literally makes her a living symbol of infinity. Unfortunately, it takes just a few twisted leaps of thought to jump from Hodler’s hopefulness, however linked with death, to the death-centric culture of a “Master Race.” Hodler may have even seen such a distortion coming when he shifted the emphasis of his work from Symbolism to Expressionist-style landscapes. Perhaps giving up on humanity ever reuniting with nature, Hodler in the end paints nature without any trace of humanity, but the taint of human angst still mars the landscape. Plagued by illness and financial troubles, Hodler entertained thoughts of suicide near the end of his life, still “half in love with death” to the end, but “night” finally closed in on him before he consummated the act himself.
Posted by Bob at 12:01 AM