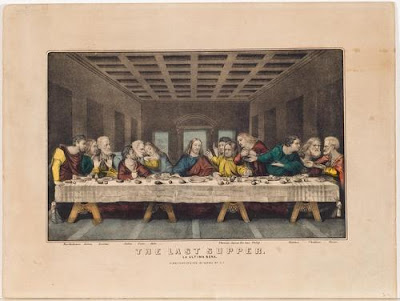 Before newspapers could properly reproduce photographs, lithography and lithographers served as the windows onto the world for most Americans unable to travel and see it with their own eyes. When James Ives (born March 5, 1824) went to work for fellow lithographer Nathaniel Currier (born March 27, 1813), it was only a few years before Ives became a full partner and Currier & Ives was born. Aside from the news of the day and homey scenes of Americana, Currier & Ives tried to bring culture into the lives of ordinary people through prints such as their version of Leonardo da Vinci’s The Last Supper (above). Before affordable reproductions of reasonable quality were available and before the beginnings of the art museum, much of the public’s impressions of fine art came through the efforts of Currier & Ives and others, who saw a market for such “high brow” images. Today, their print of The Last Supper might seem a poor substitute for seeing the real thing, but in the nineteenth century, it was far better than nothing. 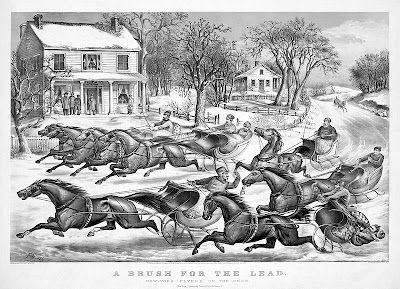 Currier & Ives was first and foremost a business, with business considerations trumping everything else. They almost always maintained a high level of quality in their work, but their subject matter targeted a deep-seated need in nineteenth century America for sentimentalism and that distinctive yet elusive idea of “Americana.” Currier & Ives’s print titled A Brush for the Lead (above, from 1867) plays into the classic ideas of sleigh rides and wintry fun that we still associate today with the idea of Christmas. In fact, Leroy Anderson's song "Sleigh Ride" alludes to a memorable moment that will will "nearly be like a picture print by Currier and Ives." In many ways, Currier & Ives created the idea of Christmas in the American psyche the same way that Charles Dickens did for Victorian England. These two lithographers depicted an unattainable ideal that people around the world still try to attain, usually before giving up and pouring another consoling cup of egg nog. 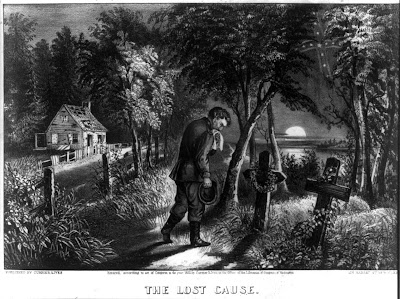 It’s hard to imagine, but Currier & Ives also did highly political prints of battles and other disasters. A Brush for the Lead comes only two years after the end of the American Civil War, which Currier & Ives depicted for many people far from the fray. After the war, they continued to analyze visually its implications in works such as The Lost Cause (above, from 1872). By 1872, the promise of Reconstruction in the South was already beginning to falter. The man in the print may mourn the fallen beneath the graves, but the Stars and Bars lurking in the trees hints at the rise of the Ku Klux Klan and other means of revenge by those who wished to continue the slave-based Southern way of life. Much like Norman Rockwell, Currier & Ives suffer from a sanitized version of their work, which emphasizes the commercial side of their partnership over the full, often darker historical and cultural relevance of the lesser-known images. Advances in print reproduction of photography doomed Currier & Ives eventually, but they made their lasting mark on American culture long before.
Posted by Bob at 12:01 AM