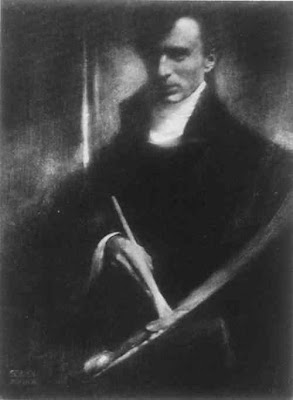 Pioneering photographer Alfred Stieglitz justly gets credit for first exposing many of the great European artists of the turn of the twentieth century to America by exhibiting them in his Little Galleries of the Photo-Secession, later know more simply by its street number—291. Cezanne, Matisse, Picasso, Rodin, and others can trace their influence on American art to exhibitions at 291. What many people forget, however, is that another pioneering photographer, Edward Steichen, introduced those artists to Stieglitz. If Stieglitz gave birth to modernism in America, then Steichen played the midwife. Born March 27, 1879 in Luxembourg, Steichen came to America at the age of two and became a naturalized citizen. For the young Steichen, photography was just one of the arts that intrigued him. The very art of photography at that time still tried to play by the rules of painting rather than boldly create a visual language uniquely suited to itself as a medium. Steichen’s 1902 Self-Portrait with Brush and Palette (above) shows just how enslaved Steichen remained to painterly convention, identifying himself in this self-portrait as a painter through the medium of photography. Steichen’s painterly eye, however, served him well in creating his own vision while capturing the essence of the visions of others. 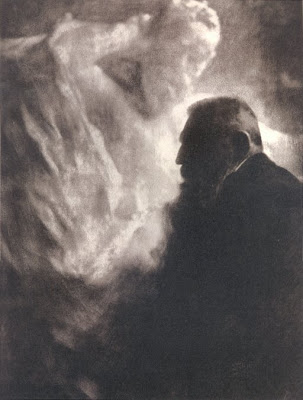 The paradox of Steichen’s portrait of Rodin, also known as “The Thinker” (above, from 1902), is that you can see almost nothing of Rodin’s face but you still get a sense of the deep thoughts of the man. Despite the hazy, almost Impressionist atmosphere, Steichen conveys the clarity of Rodin’s art and its basis in deep thinking about the human condition before fashioning it in sculpture. Just as he chose to portray himself with brush and palette in his self-portrait, Steichen shows Rodin with one of his sculptures. The man and his work are inseparably linked. Sadly, the link between Steichen and Stieglitz shattered over philosophical differences pertaining to the mission of 291. Steichen began working in a more commercial vein, creating iconic portraits of Greta Garbo and other celebrities that went beyond glitz and attempted to capture the psychological truth of the sitter. Stieglitz continued to pursue the painterly style they had shared while Steichen evolved and looked for new directions in photography. 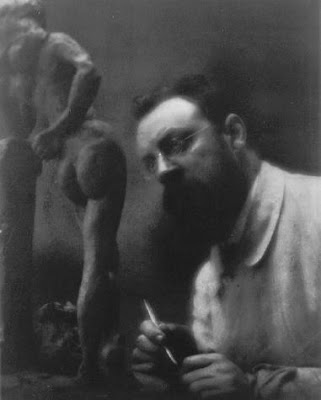 Steichen served as a documentary photographer in both World War I and World War II. In 1947, Steichen essentially retired as a working photographer to become the Director of Photography at the MoMA, establishing the preeminent photographic collection in America. The MoMA’s Department of Photography is today named in Steichen’s honor. In 1955, Steichen curated an exhibition of more than five hundred photos from sixty-eight countries titled The Family of Man. After seeing two world wars, Steichen sought to unite the world through photography, the most democratic of art forms technologically. At heart, Steichen always remained a painter, and a lover of painters. Steichen’s Henri Matisse and “The Serpentine” (above, from 1909) oddly shows Matisse with sculpting rather than painting, but Steichen knew Matisse well enough to know that Matisse’s sculpture informed his painting and gave it its soul. In many ways painting gave Steichen’s photography its soul, too, even after he put aside brush and palette.

Taking a look at the photos of famous painters does make us feel closer to art.
Like it's something more reachable and tangible.