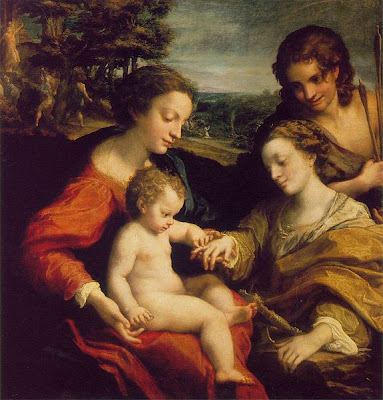 You could make the bold statement that all Western art since the 15th century has been a reaction to the Renaissance. Correggio came at the tail end of the period known as the High Renaissance, dying on March 5, 1534. Born sometime in August 1489, Correggio began as a painter in the vein of Leonardo da Vinci, especially in works such as The Mystic Marriage of Saint Catherine (above, from 1520), which recalls mystical group portraits of Leonardo’s such as The Virgin of the Rocks and The Virgin and Child with St. Anne. Correggio never emulates Leonardo’s distinctive sfumato, but he does approach the gentle handling of the genius and the naturalism of his figures. The wondering eyes of the infant Jesus staring at the ring on Saint Catherine’s finger, presumably symbolizing their “mystical marriage,” are familiar to anyone with a young child with a yen for shiny things. Behind the group, a beautifully green woodland landscape extends, similar to the stretches of natural wonder Leonardo would place behind his religious figures. 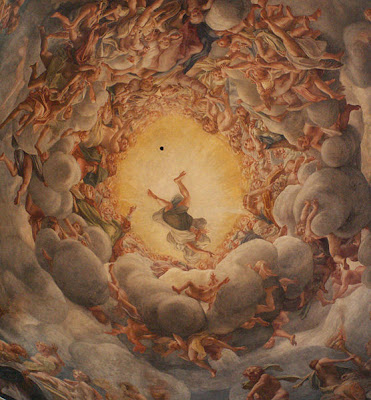 Correggio soon took his painting in a different direction—literally upwards with frescoes such as his Assumption of the Virgin (above, from 1526-1530) in the Cathedral of Parma. Standing beneath the dome, we see what the Virgin Mary would have seen during her assumption into Heaven. At the center of the swirling mass of figures, Jesus descends in a beautiful display of artistic foreshortening. Seemingly flying around the perimeter of the dome, Correggio gathers various saints and Bible figures (including Adam and Eve) to bear witness to the event. The illusionistic effects of Correggio’s gravity-defying ceiling frescoes blew the minds of spectators, helping creating a market for such effects that led to the excesses of Baroque frescoes, which soon burst out from cathedrals and churches and found new homes in the palaces of kings and queens seeking self-glorification. Correggio didn’t invent such perspective tricks, but he took them to a whole new level that stretched them beyond the bounds of Renaissance taste.

Correggio brought the same bravura brushwork and inventiveness to mythological themes such as Jupiter and Io (above, from 1531). The radiant flesh tones of Io rival that of the finest sculptors of the Baroque. Her pose of ecstacy prefigures similar poses in marble by Bernini a century later. Centuries later, the artists of the Rococo period would adopt Correggio as a forefather for his lavish treatment of the female nude in mythological guise. The excesses of an artist such as Jean-Honoré Fragonard have their root in the relative restraint of Correggio. It’s interesting that Correggio left no students behind to carry on his style, yet had such a wide range of influence centuries later. Working in Parma, outside the hotbed of artistic innovation that was Rome, Correggio stayed clear of the limelight in life and engaged the giants of the Renaissance at a distance. It’s hard to make assumptions about what Correggio’s motivations were in avoiding the artistic center of Rome, but like modern artists today who avoid the bright lights of New York, he most likely would have been a different artist if he had followed the crowd.