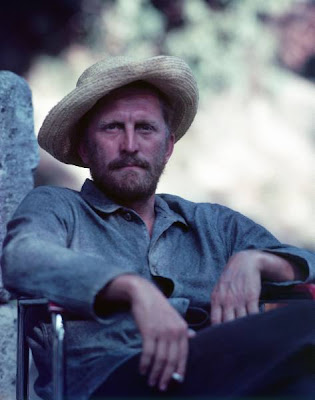 What must life really have been like with Vincent Van Gogh? Born March 30, 1853, Van Gogh tried the patience of everyone from his father to his devoted brother Theo to his one-time friend Paul Gauguin. Van Gogh’s tragic life can be played for pathos or even for laughs, however unintended. The best biography of Van Gogh’s life and thoughts is found in the letters, but even they have been subject to “creative” misreading, most notably in the novelization of those letters by Irving Stone in Lust for Life. In 1955, Kirk Douglas (above) played Vincent in the movie version of Stone’s novel, which was also titled Lust for Life. The highly physical actor Douglas played Vincent as a highly physical artist, full of passionate intensity and a lively body. Douglas portrays Vincent with an almost preternatural belief in his own abilities, even when doubt seems a sensible course. I find it fascinating how different actors have tackled Van Gogh over the years. In many ways, Van Gogh the film character has become the Hamlet of art history acting, with different actors emphasizing different elements of the real-life artist’s persona. Douglas depicts Vincent brimming with self-confidence. Van Gogh certainly needed to armor himself against doubt to persevere, but I don’t get the sense from the letters that he never harbored any doubts about his choices. 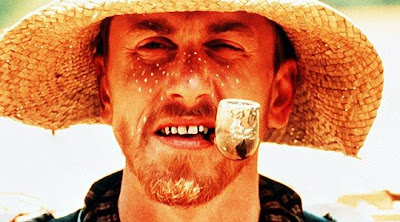 In 1990, Tim Roth (above) played Vincent in Vincent & Theo, with Paul Rhys taking on the role of Theo. As obvious from the title of the film, Roth’s Vincent is seen primarily through his relationship with Theo. In contrast to Douglas’ rugged portrayal, the slightly built Roth plays a more needy and literally hungry Vincent. In Vincent & Theo we get more of a sense of the weaknesses of Vincent that Theo had to address, which ultimately led to Theo’s own death shortly after Vincent’s suicide. Douglas’ Vincent is the typical hero of 1950s American movies—the bold individual paddling mightily against the current of conventional wisdom. Roth’s Vincent is a more complex psychological character, reflecting the art house sensibilities of 1980s and 1990s movies. Of course, by the time Roth plays Vincent, the story of Van Gogh’s tribulations was well worn territory, so plumbing the psychological depths, indeed the doubts that Douglas glossed over, presented almost virgin territory. 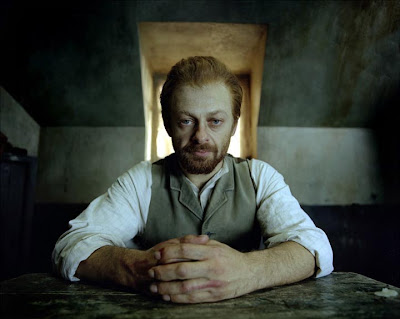 Perhaps the most disturbing depiction of Vincent Van Gogh was that of Andy Serkis as part of Simon Schama’s in Power of Art series in 2006. Fresh from playing Gollum in The Lord of the Rings movies, Serkis plays a more obsessed, more disturbed Vincent. If Douglas embodied power and Roth embodied frailty, Serkin beautifully embodies the fever pitch of all-consuming obsession. Just as Gollum loses his humanity in a single-minded quest for the ring, Serkin’s Vincent seemingly loses some of his humanity thanks to a similar kind of tunnel vision, in this case for a new vision in art. The scene in which Serkin eats paint straight from the tube (something the real Vincent actually did during his lowest points of mental illness) is simply harrowing and deeply illustrative of the anguish of the real Vincent. Each of these actors stressed a single facet of a multi-faceted personality. None of them could possibly capture Vincent whole, and even collectively they merely scratch the surface. What must life really have been like with Vincent Van Gogh? We can only guess—perhaps a little better thanks to these actors. But life with Vincent certainly must have been a constant parade of extremes. We can get a taste of those extremes through his art today, and maybe that’s all we’re meant to bear.
Posted by Bob at 12:01 AM