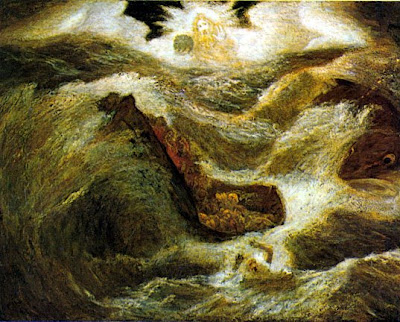 We know almost nothing about the early life of Albert Pinkham Ryder except that he was born in New Bedford, Massachusetts, on March 19, 1847, when the whaling industry immortalized by Herman Melville in Moby-Dick still dominated the local economy. The same dark mystery of the sea and its largest inhabitants that enthralled Melville clearly also left an impression on Ryder’s imagination. Ryder’s Jonah (above, from 1885) clearly takes the Bible story as a launching point, but adds a roiling sea and a sense of dreadful hopelessness that is all his own. Just as Melville’s novel examines the existential dread of the discovery of man’s tiny place in a vast universe, Ryder’s painting depicts the prophet as tiny and small in the grand scheme of things, literally swallowed up by forces larger than himself. Ryder stood alone on the very shoreline of modern art in America, born too early to ride the wave of modernism that would arrive with knowledge of the Impressionists just years later. 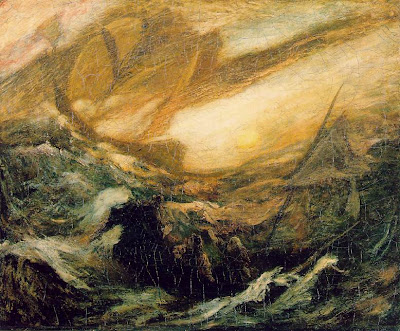 Impressionism was already in full bloom in France by the time Ryder had become a full-fledged artist. Artist-friends of Ryder, such as J. Alden Weir, were already translating Impressionism for an American audience. Ryder, however, had already formed a style unique unto himself and could not be swayed. There’s a great sense of Romanticism and narrative drama in Ryder’s art, even at its most mysterious. Like Melville and Walt Whitman, Ryder found inspiration in European opera. The Flying Dutchman (above, from 1887) takes its subject matter from Richard Wagner’s opera of the same name. In today’s post-classical music America, it’s hard to conceive the powerful hold that opera, especially Wagner’s all-consuming works, had on the American imagination. Ryder marries his New Bedford roots with the Old Europe mythology in The Flying Dutchman to create another seascape of human frustration. Just as Wagner seemed to heap up musical motifs one upon another to generate a wall of sound full of meaning, Ryder layered paint upon paint to arrive at the effects he pictured in his mind. (Unfortunately, many of Ryder’s paintings now suffer the consequences of this piling on as the subcutaneous paint often failed to dry properly, thus leaving many of Ryder’s works horrible cracked messes that gravity itself literally pulls off of the canvas.) 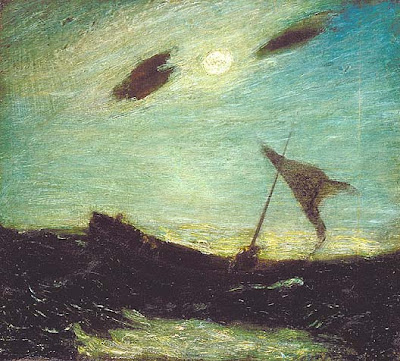 One of Ryder’s closest friends and the executor of Ryder’s estate after his death was Charles Melville Dewey. Whether Dewey was related to Herman Melville, I do not know and can’t seem to find out. Contemporary accounts of Dewey don’t mention his famous possible relation because the Herman Melville we know today doesn’t become famous until the 1920s, when he’s rediscovered decades after his death. Similarly, a generation of artists right after the turn of the century “rediscovered” Ryder during their search for home-grown modernists to stand up against the invasion of European modernism at the 1913 Armory Show. Although in decline, Ryder lived long enough to enjoy this honor. In works such as Moonlight (above, from 1887), Ryder continues to haunt American art history as a strange branch in the family tree, which eventually bore fruit in influencing artists as diverse as Marsden Hartley and Jackson Pollock. In his paintings of lonely souls borne upon dark and troubled seas, Ryder threw a lifeline to contemporaries seeking their own paths and continues to buoy experimentalists even today.
Posted by Bob at 12:01 AM