When Dr. Albert C. Barnes wanted to start the collection that eventually became The Barnes Foundation in 1910 he had more money than actual knowledge of art. Dr. Barnes resourcefully called upon his high school friend, the painter William Glackens, to buy the works that would become the foundation of the museum. Born March 13, 1870, Glackens was already a well-established illustrator and painter associated with the Ashcan School who had been to Paris many times and became quite familiar with the works of the Impressionists. Glackens’s May Day, Central Park (above, from 1905) shows how he imported to America not only the Impressionist painting technique but also the Impressionist fascination with the everyday life of regular people. May Day, Central Park captures turn of the century New Yorkers enjoying leisure in Central Park, which opened in 1859 in emulation of the green-friendly renovations by Baron Georges-Eugène Haussmann of Paris, France. One Impressionist especially obsessed with the Haussmannization of Paris was Glackens biggest influence (and biggest purchase on behalf of Barnes)— Renoir. 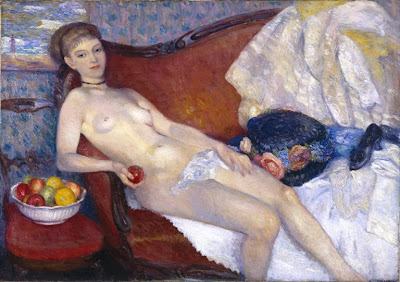 Glackens recognized the greatness of Renoir early on, buying works before the market rose. (Barnes himself would obsessively buy Renoirs for the rest of his life. Visiting The Barnes Foundation and its 181 works by Renoir today can give you a serious case of Renoir fatigue.) Glackens isn’t considered primarily an American Impressionist because of his association with Robert Henri, John Sloan, and other members of the Ashcan School, but Glackens appreciated the new dynamic of the Impressionists better than many others who simply mimicked the subject matter and brush stroke style. While others camped out on Monet’s doorstep, Glackens was painting works such as Nude with Apple (above, from 1909). Nude with Apple may not be as audacious as Edouard Manet's Olympia, which it alludes to, but for an American artist in 1909 it’s still pretty bold. Again, Glackens takes the French model and translates it into an American idiom, adding the apple to allude to this new “Eve” of the American “Eden,” where everything seemed so much fresher and newer than centuries-old Europe. 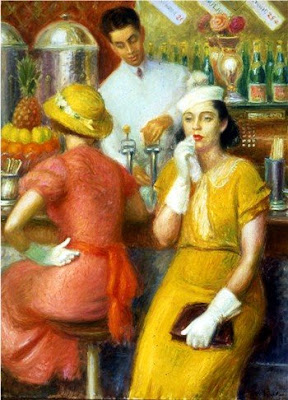 The Glackens room at The Barnes Foundation seems an anomaly after walking through rooms and rooms of Renoirs and other European masters. It stands as the simple acknowledgment to Glackens contribution of taste to the collection. For many critics, Glackens was too taken with Renoir, even to the point of losing the ability to put his own personality into his art. It is eerie how Glackens’ The Soda Fountain (above, from 1935) looks as if Renoir had traveled through time and space to drink a milkshake at an American corner drug store, circa 1935. However, I see Glackens as a great interpreter of the Impressionists, especially Renoir. Glackens saw beneath the brushstrokes and sunny day landscapes to the spirit and mind of the Impressionists. I like to think that if Manet or Renoir had been born in America in the late nineteenth century, they’d paint just like William Glackens.
Posted by Bob at 12:01 AM

Glackens must have been a real Pro back then when he realized Renoirs` potential.