The Destruction of Paradise 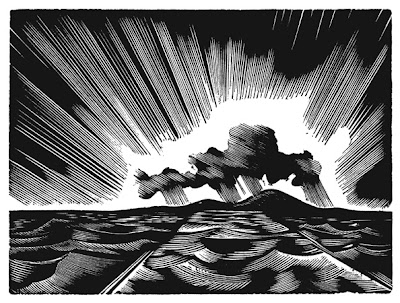 When the United States began testing nuclear weapons in 1946 on the Bikini Atoll, the artist Laurence Hyde saw it as “a microcosm of the world-to-be if civilized humanity, for the last time, failed to live up to its name. It would appear that Hiroshima and Nagasaki were not enough.” Inspired to do something through his woodcut art, Hyde worked from 1948 through 1951 on the series of woodcuts that became the wordless graphic novel, Southern Cross, which Drawn & Quarterly now reissued in a beautiful facsimile edition of the original 1951 hardback. Hyde’s work literally explodes off of the page, most graphically, of course, in his rendition of the detonation itself (above), but also emotionally in his simple story of a native family displaced and ultimately destroyed by the invading force that uses their island paradise as a testing ground for nuclear death. 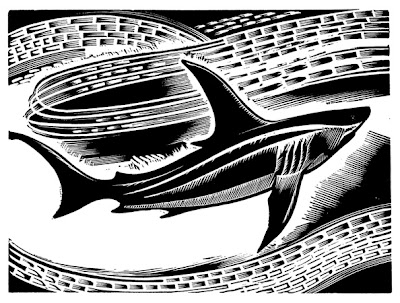 Born in England in 1914, Hyde moved to Canada in 1926 and studied the art of woodcut legends such as Lynd Ward and Rockwell Kent, who also provided an introduction to Southern Cross reproduced in this new edition. Hyde’s art shows the same transcendent, almost Transcendental link with nature that Kent’s best images do. While setting the stage before the introduction of the invaders, Hyde presents life on the island as a harmonious paradise stretching beyond the land to the depths of the surrounding sea. These breathtaking marine life pictures teem with detail and vibrancy. You almost feel the currents surrounding the shark (above) as it coexists with the other sea creatures, a peaceable kingdom beneath the waves. 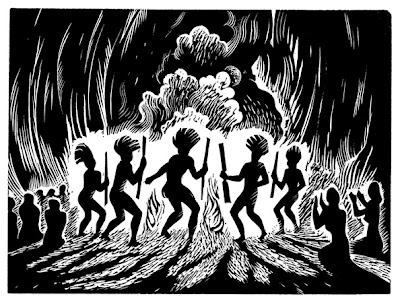 Hyde offers one last image of spiritual calm in the fireside dance and celebration of the natives (above) before the search planes zoom overhead and the landing crafts mount upon the beaches. One tragically beautiful woodcut shows the spiky silhouette of a battleship disrupting the natural lines of the horizon at sunrise. The “family values” and heartfelt communal religion of the natives contrast starkly with the disingenuous soldiers who assist in the relocation and bring the brutish side of civilization to the allegedly uncivilized islanders. Hyde achieves wonderfully effective textures in his woodcuts, mimicking even coarse chest hair on one drunken sailor, portraying him as more animal than man. A fight between this drunken sailor and one native defending his wife throbs with intensity as Hyde uses unusual cropping and angles to generate a sense of chaos, confusion, and ultimately death. Drawn & Quarterly’s facsimile edition beautifully bound in simple black and red and printed on heavy stock engenders a seriousness to the book in keeping with its subject. Just by looking at and picking up Southern Cross, you know it’s important. 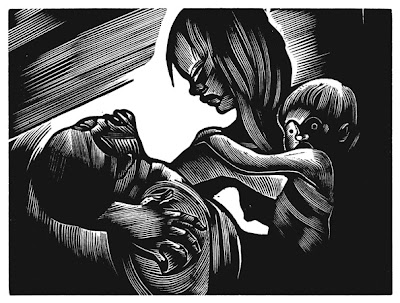 The native husband and father takes his wife and child away, hiding from the military as the evacuation concludes. Hyde carves their faces like a new Adam and Eve cast from Eden. We see the navy then lower the bomb to the ocean floor, which Hyde juxtaposes with an image of the sword of Damocles dangling perilously by a thread—a symbol of the threat of annihilation facing both the island family and those toying with weapons of mass destruction. After the bomb explodes, the father and then the mother die (above). “The child alone survives,” Kent writes in his introduction. “God only knows his fate.” Hyde leaves the door open as to that child’s fate, symbolizing the uncertain future in a world gone mad with the potential to destroy.

Southern Cross silently tells a timeless story of innocence stolen and paradise lost. Hyde’s images speak eloquently where mere words fail. Kent comes close to stating in words Hyde’s message: “The old remember peace. The children of today, the young, the middle-aged, know only war. We live in fear. And living so, we act as frightened people will: We shut our eyes.” Hyde calls for all people to open their eyes and fully recognize the futility of war and their responsibility to thwart those who pursue war. Although half a century old, Laurence Hyde’s Southern Cross seems timely today in its call to fear nothing but fear itself and to find the courage to live with rather than to destroy one another.

[Many thanks to Drawn & Quarterly for providing me with a review copy of Southern Cross and for the images from the book above.]
Posted by Bob at 6:07 AM