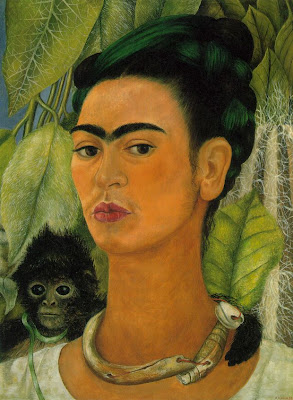 In this centennial year of Frida Kahlo’s birth comes news of the sad, yet seemingly inevitable news of “The Artless Branding of Frida Kahlo.” Thanks to a deal that Frida's niece, Isolda Pinedo Kahlo, made in 2004 with a Venezuelan businessman named Carlos Dorado, the worst elements of the market forces have been unleashed. Thanks to the Frida Kahlo Corporation, Frida Kahlo—brand tequila, sunglasses, and dolls are now available. Frida Kahlo—brand underwear and running shoes are reportedly on the way. Carlos Phillips Olmedo, a member of the board of the Frida Kahlo Trust set up by Diego Rivera in 1955, calls the branding “ a vilely commercial act that contributes nothing to Frida’s name, only the contrary, and whose only goal is profit." Somewhere in the afterlife, Frida’s famous unibrow (on display in her 1938 Self-Portrait With Monkey, above) fretfully furrows.

Like the Pataday commercial showing en plein air painter Vincent Van Gogh suffering from seasonal allergies, the idea of the horribly crippled Kahlo endorsing running shoes is laughable, if it wasn’t so sad. Kahlo’s life today approaches a state of mythic proportions in Mexico and worldwide, thanks in some part to Salma Hayek’s amazing portrayal in the film Frida. To see this feminist figure reduced to an underwear model in sunglasses demeans her in death in a way she would never have allowed in life. Kahlo most likely raised a glass or two of tequila in her day, but that doesn’t mean she ever envisioned her face on a bottle. A Kahlo retrospective rolls into the Philadelphia Museum of Art next February and I really, really hope that none of these products makes its way into the museum shops. I’m as big a fan of kitsch as the next person, especially whimsical items that allow you to incorporate a museum experience into your everyday life, but this feels more like grave robbing than bringing a piece of Frida home.
Posted by Bob at 6:18 AM