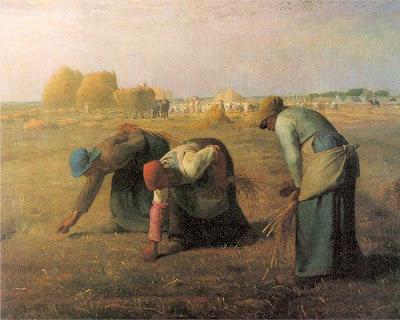 When Vincent Van Gogh looked for an artist who shared his love for the simple peasant life, he ended his search when he found the works of Jean-Francois Millet, born October 4, 1814. In works such as The Gleaners (above, from 1857), Millet shows the dignity of simple rural life and the dignity of an existence committed to hard work and devout spirituality based in a love of the land. Millet’s works glow with the warm, golden light that Van Gogh reproduced more spectacularly in his vivid, bright colors. Millet’s figures, such as the women collecting the last scraps or “gleanings” from the fields, have a solidity of form that matches their solidity of character. 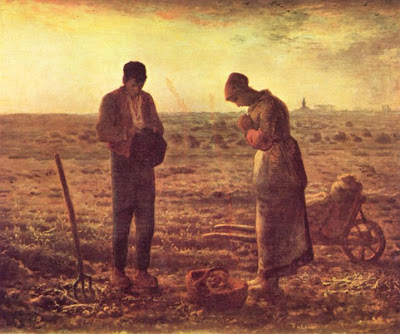 Millet stressed this spiritual side subtly in many of his works, but many others posit a more overt spirituality, such as The Angelus (above, from 1857). The conventional interpretation of The Angelus is of a man and a woman praying in a field for a better yield of crops. Salvador Dali, of all people, looked at The Angelus and suspected something more was going on. Dali believed that Millet originally had the couple praying over a tiny coffin containing their child. Other critics scoffed, but x-rays of The Angelus revealed that, indeed, an object resembling a coffin once rested at the feet of the praying couple. Perhaps Millet initially intended to paint a darker vision of the harsh reality of the hard life of a peasant, full of infant mortality, but later decided he had gone too far and lost that golden, halo-like glow that he had generated around his depictions of the poor (and was marketable to buyers). Millet's audience wanted the piety without the tragedy. 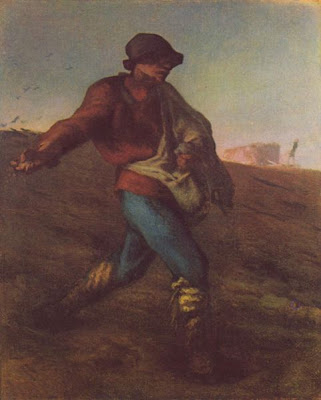 My favorite Millet painting is The Sower (above, from 1850). Millet’s Sower moves with an energy lacking in many of his other peasant pictures. So many of Millet’s peasants seem lifeless, inert in their continual posing at prayer or the fields. The Sower has a creative force in his sweeping arm and long striding legs that matches the vitality of nature. Van Gogh recognized this same power in The Sower and created his own version, reproducing the figure and placing him beneath a setting sun in Van Gogh’s characteristically throbbing landscape of brushstrokes. Even in The Sower, Millet’s most energetic image, Van Gogh could add additional solar power that Millet himself seemed afraid of.
Posted by Bob at 6:02 AM