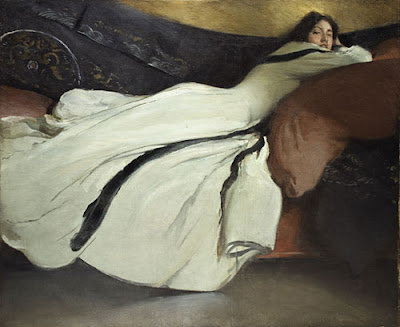 One of my favorite paintings at the Metropolitan Museum of Art in New York City aside from all the big names is Repose (above, from 1895) by John White Alexander. Alexander, born October 7, 1859 in Allegheny, Pennsylvania, stands in the shadows of many other American artists around the turn of the century. Many mistake his work for that of others painting at that time, especially John Singer Sargent and James McNeill Whistler. Alexander’s rise in the art world from humble beginnings still inspires me. An orphan raised by his grandparents, Alexander developed his drawing skills by himself enough to travel to New York in the late 1870s and find work as an illustrator and political cartoonist. When he had raised enough money, Alexander then traveled to Europe and studied in Germany, France, and Italy, meeting Whistler in Venice and learning some of his atmospheric tricks. The gentle haze of decadent lounging pervading Alexander’s Repose owes much to Whistler’s example, but Alexander’s reclining figure seems more classical in her pose and repose than Whistler’s women, who often seem simple conveniences for experiments in color.

There’s a poetry to much of Alexander’s imagery, as in Isabella and the Pot of Basil (above, from 1897), the subject of a poem of the same name by John Keats. In its romantic shading and ethereal expression, Alexander almost seems to verge on Symbolism or even Surrealism. As in Repose, the flowing lines of the drapery are beautiful, a testament to his draftsmanship. Like Sargent, Alexander could create a flattering image, making the person seem more beautiful or noble than they would in reality. The model for Isabella may have looked this otherworldly in real life, but I doubt it. 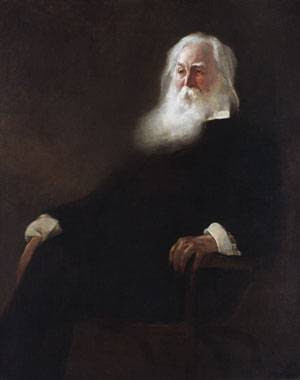 After studying in Europe, Alexander returned to the United States and New York City in the early 1880s, setting up shop as one of the preeminent portraitists of the time. Famous figures such as Oliver Wendell Holmes and Walt Whitman (above, from 1889) sat before him. Alexander’s portraits of men suffer from conventionality, even when face to face with unconventionality personified—Walt Whitman. Next to Thomas Eakins’ portrait of Whitman, Alexander’s seems lifeless. Eakins’ painting explodes with the exuberance of the sitter, whereas Alexander’s work seems to chain him down, forcing him into the pose and dress of a stodgy bank teller. Alexander certainly ranks behind the likes of Eakins, Sargent, and Whistler, but his works still provide an interesting counterpoint to those artists and testify to the growing depth of talent in American art in the late 19th century.