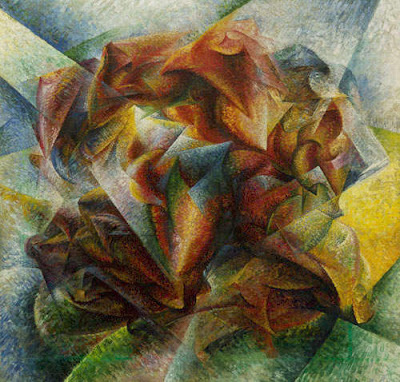 My favorite artist of the Italian Futurists, Umberto Boccioni, was born on this date in 1882. Few artistic movements captured so well the sense of speed and movement as the Futurists, and Boccioni stood at the head of that class with works such as Dynamism of a Soccer Player (above, from 1913). Futurism took the Cubist idea of seeing an object or person from all three dimensions at once and added the fourth dimension of movement. Whereas Picasso’s and Braque’s Cubist works freeze their subjects as if in a brownish amber, Boccioni frees his subjects through a warp-driven frenzy of movement and color. It’s easy to forget the dark side of Futurism, i.e., their glorification of the machine and, hence, the machines of war, looking at Boccioni’s fun, flying footballer. 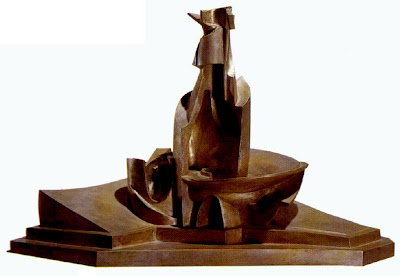 Boccioni studied under the painter Giacomo Balla with his friend Gino Severini, learning the divisionist style. All three later met up with the poet Filippo Tommaso Marinetti around 1910, forming the Futurist group, who spat out manifestos the way most people breathe. While Marinetti supplied the philosophical underpinnings of the group, Boccioni and the others supplied the actual art. Development of a Bottle (above, from 1912) shows how Boccioni’s skills as a sculptor soon overtook his ability as a painter. Boccioni charges even an inert bottle with his explosive energy, sending it spinning within his sculpture, seemingly unraveling before your eyes in a ribbon of glass. As thrilling as this image appears, the element of danger persists, again casting up memories of Futurism’s deal with the devil of warfare. Boccioni’s The City Rises of 1910 shows his vision of a Futurist city caught in this same sense of tumult, the birth pangs of the new mechanized utopia of the Futurists. Unfortunately, the Futurist utopia of perpetual motion also meant a perpetual future of unsettled anxiety, a rollercoaster that never ends. 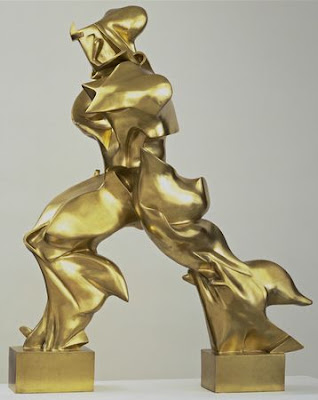 Unique Forms of Continuity in Space (above, from 1913) remains Boccioni’s signature work and perhaps the greatest of all Futurist artworks. The sense of movement of the figure is so dynamic, so real that it seems alive. Duchamp comes close in his Nude Descending a Staircase, but Unique Forms trumps Duchamp in realizing this movement in three-dimensional sculpture. As beautiful as I find Unique Forms, I also find it chilling. The moving figure here is an automaton, moving with no personality or individuality, a relentless, robotic machine presaging the relentless march to death of the generation that World War I would feast upon. Boccioni followed his Futurist ideals and volunteered for the Italian army in 1915. A little over a year later, he was dead. Most of his fellow Futurists followed shortly thereafter. Boccioni’s paintings and sculptures seduce us even today with their promise of power and speed, the hot Italian sports car of the stereotypical male’s mid-life crisis, but like that sports car, brings the potential for tragedy as well as ecstacy.

I’m from South America, my work is some dark and funny (it´s rare mixing) if you have time, please visit my gallery on...