The Student Becomes the Teacher 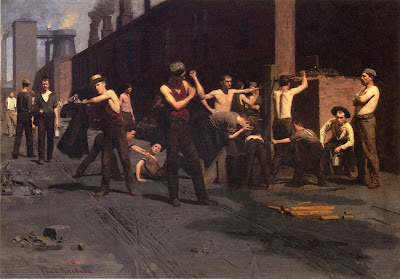 In works such as The Ironworker’s Noontime (above), Thomas Pollock Anshutz exemplifies the realist side of the Ashcan School that recognized the urban existence of the early twentieth century as the new grand subject for American art. Born October 5, 1851, Anshutz attended the PAFA as a student from 1875 through 1881 under the tutelage of Thomas Eakins. After graduating, Anshutz became Eakins’ designated assistant and chief photographer, remaining with the PAFA in some capacity for the most part until his death in 1912. Students such as Maxfield Parrish and Charles Demuth recall Anshutz as a gifted and giving teacher, supportive even when they took their art in directions other than his own brand of realism. Not until 1985 did scholars discover the dark side of Anshutz and his involvement in the conspiracy to oust Eakins, his friend and mentor, from teaching at the PAFA, the scandal that began Eakins’ sad marginalization from the American art world. 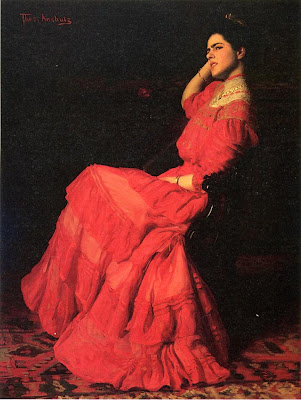 Anshutz learned well from Eakins. In works such as A Rose (above, from 1906), Anshutz shows not only the technique of Eakins but also some of the gift for bold color of John Singer Sargent. Rebecca Whelen, the woman in A Rose, was the daughter of one of the trustees of the PAFA while Anshutz taught there. Anshutz’s artistic output is relatively small, due in part to his commitment to teaching. In such works as A Rose, his photographic realism reflects his interest in photography, which Eakins encouraged and developed in making Anshutz his chief photographer in his many photographic experiements of nude bodies in motion. Maxfield Parrish’s use of photographs in his works resulted from Anshutz’s teachings. 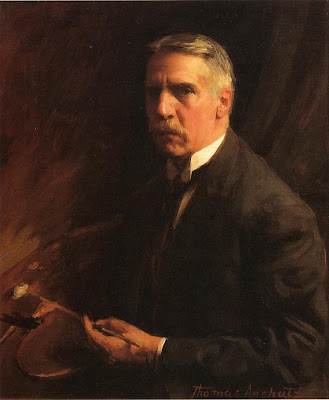 As a devotee of Eakins, I cringe at the sight of Anshutz’s Self Portrait of 1909 (above), showing the painter as respectable teacher and painter, comfortable in his position in society, a position he helped deny to Eakins. Sidney Kirkpatrick in The Revenge of Thomas Eakins sees Anshutz as “the prime mover of this conspiracy” to remove Eakins from his teaching position at the PAFA after the episode involving a nude model. Anshutz himself took many of the nude photos that incriminated Eakins before the trustees of the PAFA and the court of public opinion, yet he led the secret movement within the PAFA to take Eakins' teaching position away. With Eakins gone, Anshutz easily slid into his open slot. Anshutz went on to teach many years and earn a minor place in American art history. Eakins taught sporadically after his expulsion before ending his teaching days completely after another sexually charged scandal involving his niece. Today, Eakins has his revenge in his towering reputation in relation to that of Anshutz, but that seems cold comfort today.