To France and Back 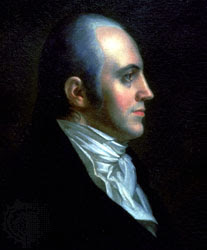 When Aaron Burr had to flee the United States and find sanctuary in Paris, his one-time protégé John Vanderlyn remained faithful and loaned money to the disgraced politician. Born October 15, 1775, Vanderlyn cozied up to many political figures, starting with Burr, whom he painted in 1801 (above) at the height of his power as Vice President of the United States, just a few votes away from the Presidency itself. While Vanderlyn studied under Gilbert Stuart, Stuart had Vanderlyn copy a portrait of Burr, beginning a relationship that would lead to Burr’s patronage that would send Vanderlyn to Paris in 1796 to study art—the first instance of an American artist traveling to France rather than England to study. Vanderlyn returned with a fine neoclassical education, lending an air of classicism to his portraits of later presidents James Monroe, Andrew Jackson, and Zachary Taylor. 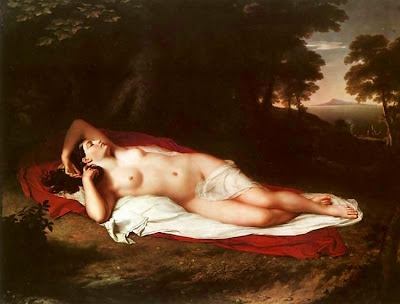 Vanderlyn’s neoclassicism and Franco-philia led him to paint one of the first great nudes of American art—Ariadne (above), currently at the PAFA. Into the conservative art world of the still-young United States, Vanderlyn injected a taste of French Salon art with this satiny, almost porcelain-skinned nude. Seeing this painting in person at the PAFA, you feel a chill from the almost inhuman coldness of the figure, more marble than flesh. In the early nineteenth century, however, Vanderlyn’s Ariadne seemed too hot to handle, barely making it past the gates of respectability thanks mainly to his use of Greek mythology in his title and the desire of the art intelligentsia of the early republic to bring a European sophistication to American art. Vanderlyn’s Parisian training led him to view American art in a poor light as trailing behind European standards thanks to its puritanical baggage. 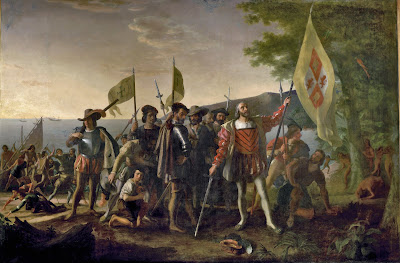 Vanderlyn struggled financially throughout his career, despite his powerful connections. Those connections landed him a commission in 1842 to paint The Landing of Columbus (above) as part of a series of paintings to hang in the Capitol Rotunda. (Rumors surround the work claiming that Vanderlyn, fearing his loss of skill, paid another painter to do it for him.) An engraving of The Landing of Columbus later appeared on the United States $5 bill. Sadly, Vanderlyn never found the proper outlet for his Parisian-honed skills—never rising to the front ranks of portraitists, failing at the genre of blockbuster panoramas ala Frederic Edwin Church despite opening up his own New York City gallery, and never succeeding at creating the new standard of taste he hoped Ariadne would engender. However, as the first American artist in Paris, he set the stage for the generation of Thomas Eakins, Mary Cassatt, and John Singer Sargent, all of whom would bring a taste for French art back to their homeland with a distinctly American flavor.