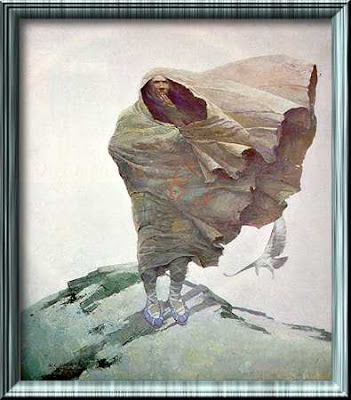 We all know time marked as B.C. and A.D., but in Chadds Ford, Pennsylvania, time is still marked as N.C. Newell Convers Wyeth was born October 22, 1882 in Needham, Massachusetts, and was reborn when he came to Chadds Ford in 1902 to study painting under the illustrator Howard Pyle. Within a year, Wyeth’s work began to appear on the covers of The Saturday Evening Post, Harper’s Weekly, Scribner’s Magazine, and other notable periodicals of the time. N.C.’s career as an illustrator of children’s literature took off from that point, not only launching his own name into the annals of art history but also founding the dynasty that his son Andrew and grandson Jamie would carry on. Works such as Winter (above, from 1909) show the solidity and power of N.C.’s figures, which here seems as rock hard as the mountain he stands upon, the wind billowing his cape into another mountain range of fabric. Upon the rock that was N.C. Wyeth, a whole direction in American art was founded. 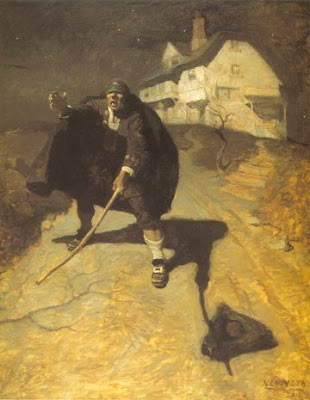 N.C. found his greatest and perhaps most memorable subjects in fantastic tales of children’s literature, illustrating such immortal works as Treasure Island, Kidnapped, Robinson Crusoe, and Robin Hood. Blind Pew (above), from Robert Louis Stevenson’s Treasure Island captures the dark danger of that tale while also harking back to N.C.’s Massachusetts roots through the inn in the background, which N.C. copied from a building in his hometown of Needham. The props N.C. kept around his studio for reference for these illustrations inspired his sickly son Andy to live out the tales of Robin Hood with his friends in the woods surrounding their Chadds Ford home, sparking the imaginative life that would grow into the mythological cosmos of “Wyeth Country” portrayed in Andrew’s paintings and populated by the simple people of that region. After travels in the American West in 1904 and 1906, N.C. added scenes of Cowboys and Indians to his repertoire. 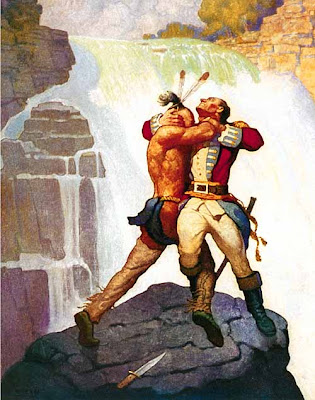 Despite his growing success, N.C. felt the sting of the label of being “just” an illustrator. He struggled to paint in a more painterly style, painting his surroundings and the farmers working in the field, subjects his son would adopt in his rise to fame. Today, illustrations holds a more respected place in American art, with images of N.C.’s such as the struggle between the Native American and the British soldier from The Last of the Mohicans finally earning their due. The long, wide shadow of N.C., killed tragically with his grandson in 1946 when their car stalled on train tracks near their home, still looms over the Wyeth clan and the entire Brandywine Valley. Andrew, Carolyn, and Jamie Wyeth all have dealt directly or indirectly with the legacy of their father and grandfather. Even Karl J. Kuerner, grandson of N.C.’s neighbor and the subject of many of Andrew’s portraits, shows the influence of N.C. in works such as Out of Nowhere, a painting of an oncoming train that alludes to the tragic accident that actually took place on his grandparents’ farm. Andrew paid tribute to his father in his painting Winter 1946, which shows a young man navigating a huge hill near their home. That huge hill to be navigated is the memory of N.C. Wyeth, larger than life and yet even larger in the realm of imagination.
Posted by Bob at 6:01 AM