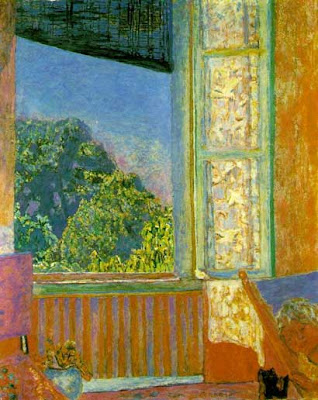 Surrounded by the powerful art and personalities of the Fauvists and the Cubists in early twentieth century France, Pierre Bonnard could have easily succumbed to their influence. Instead, Bonnard, born on this date in 1867, sought out his own path, choosing as his subject the simple facts of his life and his love of his companion Marthe. With works such as The Open Window (above, from 1921), Bonnard opened a window onto his heart, allowing us to see it in all its color, boldness, and intimacy. I find this embracing, open aspect of Bonnard to be almost as arresting as his wonderful ability to bring fresh color to even the most everyday scene.


In 1889, Bonnard entered a design for a French champagne company looking to spice up their advertising campaign. Bonnard’s winning entry later influenced the great master poster designer Henri Toulouse-Lautrec, whom Bonnard met in 1891. Although he was influential to some degree, Bonnard himself resisted all influences and schools. His involvement in Les Nabis, the “prophets” who revolutionized much of French printmaking at the turn of the century, was the rare occasion in which he joined any group. Even while painting the same South of France as Henri Matisse in works such as Saint-Tropez, Pier (above, 1912), Bonnard remains realistic enough to avoid falling into Fauvism yet still captures and amplifies the glorious colors of the Riviera. Matisse famously claimed that the Riviera’s skies had the blue he’d been searching for all his life, and then turned the idea of realistic color on its head. Bonnard saw that same blue and made it his own without changing one thing. 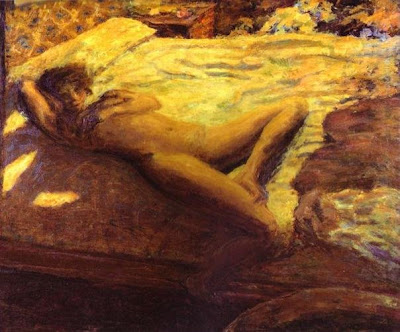 In paintings such as Indolence (above, from 1899), Bonnard paints the intimate part of his life with amazing openness. Bonnard met the woman in Indolence, Marthe, in 1893 and spent the rest of his life with her, yet waited thirty-two years before he married her. So much of Bonnard’s work is an open window on his intimate life, including his relationship with Marthe. Many of the interiors he paints show her sitting at a table, eating or drinking, doing the everyday things that all people do. Bonnard’s paintings are in many ways love letters to Marthe, showing her how amazing their life was together, how even the quietest moments resonated with color and energy for him. Such a display perhaps speaks of a greater commitment than any ring ever could.