And Did Those Feet… 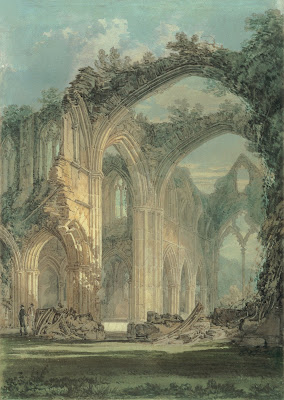 And did those feet in ancient time
Walk upon England’s mountains green?

Beginning with the instrumental strains of Jerusalem, Charles Perry’s setting to music of William Blake’s Preface to Milton, J.M.W. Turner: A National Gallery of Art Film Presentation transports you back to England of the early 1800s and lets you walk with Turner “upon England’s mountains green” and recreates the deeply intertwined histories of the artist and his country. This 30-minute film, available on DVD from Microcinema International and to be aired in the United States on PBS in conjunction with the National Gallery of Art’s J.M.W. Turner exhibition, magically presents Turner as a man of his time, taking in all the poetry, natural beauty, and Romanticism and creating timeless works of art. Works such as The Chancel and Crossing of Tintern Abbey, Looking towards the East Window (above) translate into paint the poetry of William Wordsworth as only Turner could. 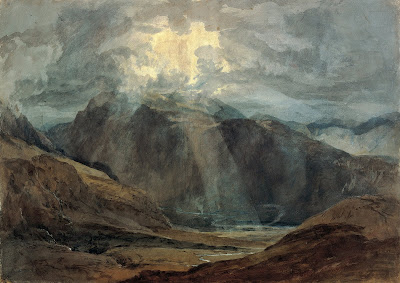 Actor Jeremy Irons, in a majestic British accent, narrates the story of Turner ascent as an artist and Turner’s lifelong desire to raise the then-lowly genre of landscape above all others. Placing Turner within the Romantic context of other artists such as Caspar David Friedrich and Joseph Wright of Derby, the film draws a direct link between the spirit of the age and such atmospheric works of Turner as Nant Peris, Looking towards Snowdon (above). The light in Turner’s paintings shines even more stunningly through director Carroll Moore’s use of panning about the paintings, removing the framework and inserting us into the scenes, almost putting us into Turner’s mind itself. A DVD extra featuring readings of poetry by Lord Byron, Samuel Rogers, and even Turner himself that Turner linked to several of his paintings adds an extra dimension to this presentation, a transcendent multimedia experience that may actually come close to Turner’s original intention. By the end of the film, you understand how landscape rises to the head of the class thanks in large part to Turner, setting the stage for the Impressionists and other modernists who dare to follow Turner’s bold example.

As I was watching Turner, I couldn’t help but compare it in my mind with the NGA’s DVD for the Edward Hopper exhibition (reviewed here). Although both directed by Moore, the differences in tone show a diversity and great understanding of the subjects. Whereas Hopper featured talking heads, film clips, and other modern trappings, Turner features mostly the paintings themselves, interspersed with momentary clips of the natural settings that inspired Turner, free of talking heads and other signs of the world today. Even the DVD extra of on-location still photographs includes only a handful with the crew visible, as if the film was shot by the landscape itself. Another DVD extra features a slideshow of Turner paintings accompanied by seven minutes of classical music that alternates between the soaring and the pensive, another sensual fireworks display free of intrusion.

Although the pace of the information provided in Irons’ narration may overwhelm the total newcomer to Turner, the beauty of the images should induce repeated viewing. This film introduces Turner in all his beauty, wonder, and courage and will entertain and enlighten even the most devout fan.

[Many thanks to the National Gallery of Art, Washington, DC for providing me with a review copy of this DVD and the images above from the exhibition J.M.W. Turner.]
Posted by Bob at 6:28 AM