A Man of Few Words 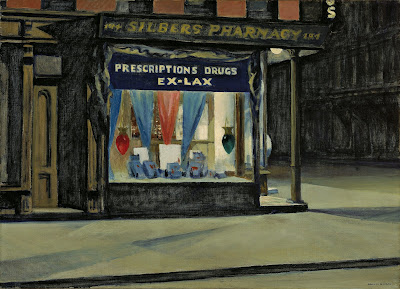 
Continuing the season of Edward Hopper surrounding the exhibit at the National Gallery of Art in Washington, DC, the NGA presents Edward Hopper: A National Gallery of Art Film Presentation narrated by comic actor Steve Martin. In this short, 30-minute film now available on DVD and to be shown on PBS in America, the NGA condenses the impressive exhibit catalogue into a beginner’s course on Hopper, yet adds the captivating element of film of the man himself. Juxtaposing photos of the buildings and locations Hopper painted with the paintings themselves, the viewer sees through Hopper’s eyes, recognizing the stark beauty and emotional weight of familiar settings such as Drug Store (above). 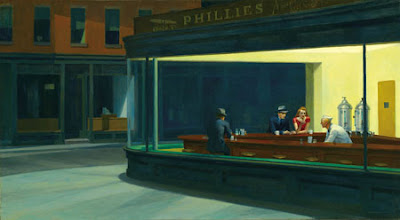 Carol Troyen, co-curator of the exhibit from the MFA in Boston; Judith Barter, co-curator from the Art Institute of Chicago; and Avis Berman, author of Edward Hopper’s New York provide expert commentary on the man and his work. Artists Red Grooms and Eric Fischl discuss their debt to Hopper and present their own works as evidence. Seeing these experts discuss Hopper while sitting in his Greenwich Village studio and then seeing Hopper himself interviewed in archival footage in that same studio, you feel a palpable connection between those speaking today and the past. To see and hear Hopper speak in that trademark laconic fashion with downturned eyes, you instantly connect the man who had no time or desire for small talk with paintings such as Nighthawks (above).

Carroll Moore, writer, director, and producer of the video, makes wonderful use of the medium to explore the relationship between Hopper and cinema. After watching a clip from The Public Enemy as an example of film noir in Hopper’s work, you almost expect Jimmy Cagney to walk out of one of Hopper’s pictures. Hopper’s influence on Alfred Hitchcock’s Psycho, Terrence Mallick’s Days of Heaven, Wim Wenders’ The End of Violence, and even Steve Martin’s Pennies from Heaven (directed by Herbert Ross) proves just how powerful a hold Hopper could take (and still takes) on the creative mind. 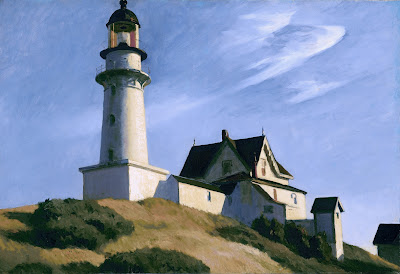 Location shots in Maine and Massachusetts to show where Hopper painted such works as The Lighthouse at Two Lights (above) allow you to experience yourself the feelings Hopper may have had in those surroundings. One of the DVD extras presents productions stills from the crew’s time in Cape Cod and Gloucester following in Hopper’s footsteps that will make you wish you were there with them. Carroll Moore and the NGA have created a great introduction to Hopper that also works as a wonderful refresher course for people who already know (or think they know) Hopper.