Tales From the Crypt 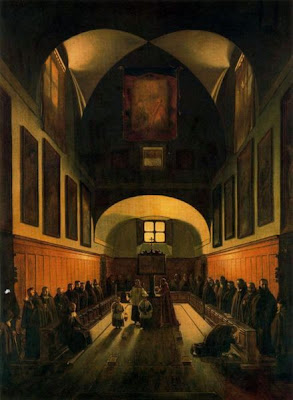 After studying with Jacques-Louis David, Francoise-Marius Granet searched for a subject to ignite his artistic imagination. Granet, born September 17, 1775, found one in the rites and rituals of the Roman Catholic Church. In scenes such as Le Choeur de la Chapelle des Capuchins a Rome (above), from 1808, Granet captures the mystery and majesty of the secretive rites of the church, especially the exclusive orders such as the Capuchins and the Templars. The soaring architecture that houses these figures amplifies the power of the mystery, adding a gravitas only a sense of the ancient can provide. Granet would have loved reading The Da Vinci Code.

Thanks to works such as Matthew Lewis’ sensational Gothic novel The Monk, the early 19th century viewed the Roman Catholic Church as an alien entity, but one that was a source of endless speculation and fascination. Lewis’ work and similar novelizations drag the Church through the mud, generously heaping on the sexual and violent tall tales readers eagerly lapped up. Granet never seems to delve into that aspect of the fascination, choosing instead to document the rites almost like an anthropologist, with just a minimum of Romantic flair. In 1806’s The Crypt of San Martino ai Monti, Rome (above), Granet descends into the dark crypts beneath the church and even shows an enshrouded body to the right, as if this were the very moment of the funeral rites.

Granet did emerge for fresh air sometimes, and was known by contemporaries for his landscapes as much as for his Church scenes. S. Trinita Dei Monti and the Villa Medici, Rome (above) shows just how adept Granet was at showing the outside of buildings as he was in showing the deep, dark interiors. During the French Revolution, Granet fled to his hometown of Aix-den-Provence and founded the Musee Granet, which still stands today and houses works by Aix-en-Provence’s main claim to fame, Paul Cezanne. Granet served as curator of the Louvre from 1826 and later as curator at Versailles in 1833. It’s amazing to think that Granet worked during the heat of the French Revolution and emerged unscathed, unlike his teacher David. Perhaps his time in the crypts saved more than his soul.
Posted by Bob at 5:50 AM