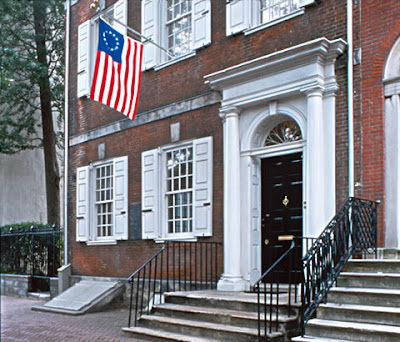 Thanks to the prompting of a friend, I recently visited the Powel House (above) here in Olde City Philadelphia, one of the best examples of 18th century Georgian architecture in the city. Samuel Powel, the last pre-Revolutionary War and first post-Revolutionary War mayor of Philadelphia, purchased the home in 1769, four years after it was built. Along with his wife Elizabeth, Powel conducted business with and partied with the biggest names of colonial America. What really knocked me out was their collection of artworks. 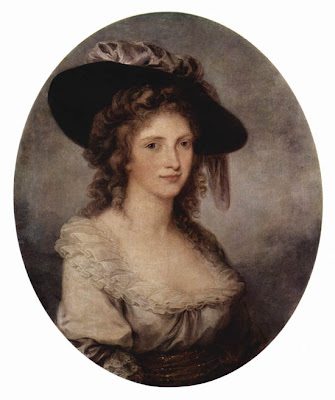 A portrait of Powel painted by Angelica Kauffmann hangs in the entrance hall. In the dining room hangs a self-portrait by Kauffmann, allegedly a gift from her to one of Powel’s relations who had grown smitten with the artist while traveling in England. (A different self-portrait by Kauffman appears above.) Portraits of various family members cover the walls of both floors open to the public. Many show the common technique used by for hire portraitists of the time in which they painted standard bodies in their studio and then had the subject sit only for the head, which often didn’t match up properly with the body. A portrait of Elizabeth Powel by Matthew Pratt, one of the finest portraitists of colonial Philadelphia, shows just how far American art had come by that time. Upstairs, in the music room, where George Washington himself celebrated his birthday and his 20th wedding anniversary (reportedly without Martha), a portrait of a young woman related to the Powels painted by Gilbert Stuart shows his mature style at its best. 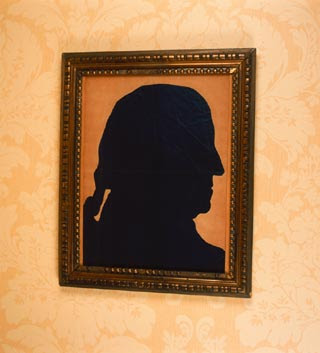 I found it fascinating to see this wonderfully restored home and how it reflected the art tastes of the time. An etching of a Rembrandt self-portrait displayed in one of the front rooms used for business testifies to the master’s renown at that time. Samuel Powel himself dabbled in the common form of amateur portraiture of the age known as the silhouette, creating two of George Washington now on display. Washington approved of the likeness shown above, but disapproved of the jowlier version with the double chin sagging beneath. Although you can fit everything I know about furniture on an IKEA gift card, even I could tell that the period furniture displayed was absolutely beautiful and built to last. If you’re ever in Philadelphia and have exhausted the big name tourist attractions, do yourself a favor and step back in time and see how the rich and powerful art lovers of that time lived.
Posted by Bob at 5:47 AM