Running With the Devil 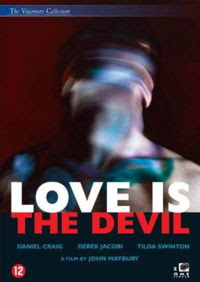 Love Is the Devil: Study for a Portrait of Francis Bacon examines the tormented love affair of Francis Bacon and his paramour George Dyer. Derek Jacobi plays Bacon and a pre-James Bond Daniel Craig plays the doomed George in this macabre 1998 film that tries to duplicate the madhouse atmosphere of Bacon’s art.

Rather than cover all of Bacon’s life, writer and director John Maybury focuses in on the seven years that Bacon spent with Dyer. Dyer literally falls into Bacon’s lap during a failed burglary attempt. Given the choice of jail or Bacon’s bed, George chooses the latter. If not for his studio, numerous mentions of Bacon’s talent in the dialogue, and a few scarce scenes of Jacobi flinging paint onto canvas, it would be hard to picture the Bacon of this film as a painter. Instead, Jacobi plays Bacon as a satyr, greedily consuming raw pleasure in all its forms. We see Bacon the denizen of the crowded pub, surrounded by similarly aging and declining gays, much clearer than Bacon the artist. Maybury, however, argues a compelling case that the party animal gave birth to the painter—the lust for life and pleasure in all forms as the obverse side of the coinage of Bacon’s art, especially its sense of emptiness and horror at modern existence. 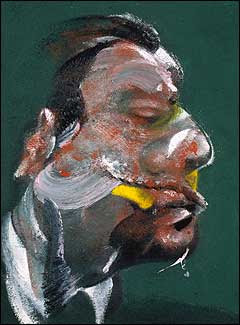 Much of the cinematography plays with the distortion of faces, much like the blurred faces of Dyer in Bacon’s paintings of him (Bacon’s Study for Head of George Dyer is above). Extreme close-ups of people stuffing food into their faces become Hieronymus Bosch-like in their horrific intensity and bloated vacuousness. Maybury uses sound to wonderful effect in such scenes, making you hear the blood rushing in your ears just as George himself does, overwhelmed by the decadence and hopelessness around him. 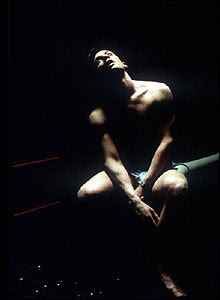 Craig (above) portrays George as a twisted romantic, injured by Bacon’s indifference and his devil-may-care approach to their relationship. As George speeds toward his sad ended, propelled by alcohol, drug, and carnal abuses, we feel his pain both physically and psychically. The physicality of Craig’s performance, from the first fall into Bacon’s life to the final fall in a Paris hotel room on the eve of Bacon’s first museum retrospective, speaks much more eloquently for Dyer’s memory than the real-life pugilist and petty thief ever could in words. 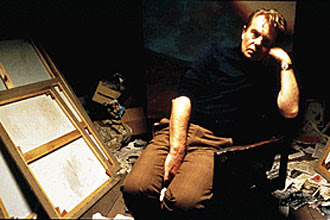 Jacobi almost too easily slips into the darkness in Bacon’s soul. The imp of the perverse deep within Bacon refuses to embrace a true bond with George, regardless of how much part of Bacon wants it to happen, and Jacobi believably conveys this tension within the artist. Even after George’s death, Bacon cannot resist fortifying the public façade of indifference and nihilistic pleasure-seeking. But we gain access to the deep stare of deep longing Jacobi places on Bacon’s face as he sits alone in his studio (still image above), pondering his losses and mourning the pleasures won in exchange.

Love Is the Devil brings an intensity rarely seen in biographical films yet wholly apt to the subject of Bacon. Nothing else but everything could give justice to Bacon. I watched wishing that more of the art itself appeared, but in the end I realized that Bacon lived his pictures more than he painted them, so showing the end results was superfluous. The faint of heart should steer clear of Love Is the Devil. Rough sex, full frontal male and female nudity, and coarse sexual language assault the senses—again, much like a Bacon painting. In such a portrayal so in the spirit of its subjects, Jacobi, Craig, and Maybury bring home the Bacon.