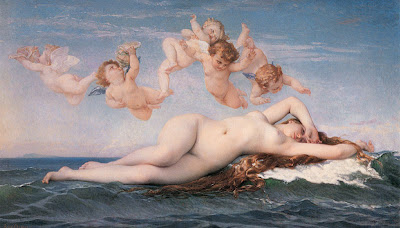 In The Judgment of Paris: The Revolutionary Decade that Gave the World Impressionism, Ross King shows how the Parisian art world of the second half of the 19th century lined up in two opposing camps, the conservative, establishment painters of the Salon versus the rising tide of Impressionism, led by Edouard Manet and others. Alexandre Cabanel, born September 28, 1823, stood with the establishment and against Manet et al. In works such as The Birth of Venus (above), from 1863, Cabanel toed the line when it came to the tradition of the nude and closed ranks with his fellow Salon painters William-Adolphe Bouguereau and Ernest Meissonier. Cabanel's sanitized, bloodless, mytholigized nude couldn't stand up to the flesh and blood women Manet would present to the world. Posterity, of course, has not been on their side. If anything, their opposition fired up the Manet and his friends even more. 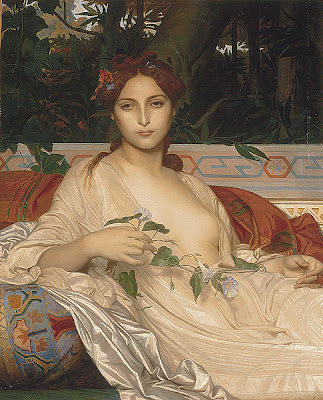 Cabanel was Napoleon III’s painter of choice. Napoleon III actually purchased The Birth of Venus, which serves as a concise example of what Manet’s Olympia flew in the face of. Cabanel certainly could paint, as could all of the conservative, Salon-accepted painters, who perpetuated their style by serving on juries for the Salon exhibitions that could make and break careers. Today, both The Birth of Venus and Olympia hang in the Musee D’Orsay, as different as two contemporary paintings could possibly be. As beautiful as such paintings as Cabanel’s Albayde (above, from 1884) are, they lack a life that Manet’s depictions of contemporary living do. The times in Paris were changing, and Cabanel and others were desperately trying to stop the clockhands. 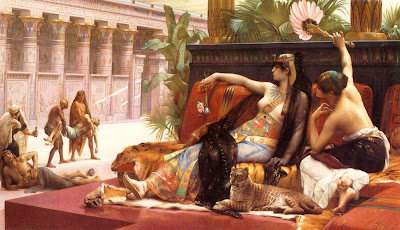 Cabanel’s painting Cleopatra Testing Poisons on Condemned Prisoners (above) seems almost laughable against Manet’s contemporary scenes today. From our perspective, such costume drama seems weak next to the vibrancy of those who were painting the world around them. From their perspective, however, Cabanel’s grand history painting drew in the crowds, appealing to the very taste that the Salon tastemakers had created. By supplying their own demand, Cabanel and his cohorts, like Cleopatra, picked their own poison, painting their own way to the end and into relative obscurity. It’s interesting to contrast Cabanel’s reaction to that of Jean-Leon Gerome, a fellow Salon painter and instructor who also painted grand historical scenes. Gerome continued to paint in his fashion, but taught artists such as Thomas Eakins to go their own way and paint the world around them, if they chose. After returning to America, Eakins sent watercolors of his rowing scenes to his old teacher, showing him the direction he had taken and would take in American art. Gerome approved. If Cabanel and others could have “gone with the flow,” too, they may have survived the Impressionist flood and, perhaps, avoided the controversy that gave them their first entrance into the public consciousness.