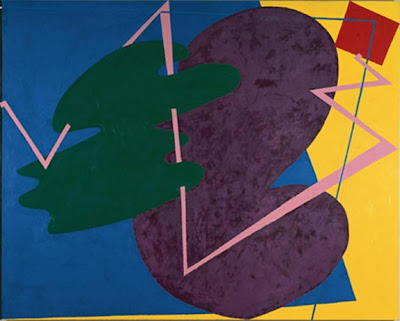 After all the angst of the Abstract Expressionists and head-in-hands philosophizing of the Minimalists, Elizabeth Murray’s paintings swept into the art world like little children full of fun and playfulness loosed upon a stuffy art gallery. Murray, born September 6, 1940, sadly passed away last August 12th, but her colorful, joyful works, such as Children Meeting (above), from 1978, live on. Before lung cancer finally took her life, Murray breathed new life into the moribund art world desperately needing to learn to laugh again. 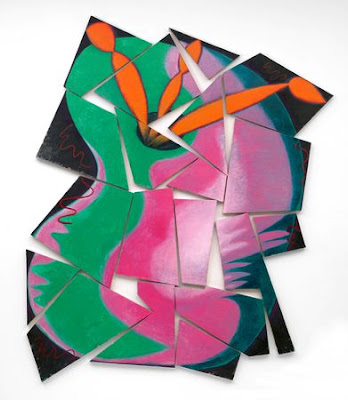 While growing up in a world of poverty and intermittent homelessness, Murray developed a passion for drawing. She even sent a filled sketchbook to Walt Disney in hopes of landing a job as his secretary. Much of that Disney-esque imaginativeness fills her works, such as 1981’s Painter’s Progress (above). In Painter’s Progress, Murray shatters the painting image then reassembles it like an ill-fitting jigsaw puzzle to reveal a painter’s palette of hot pink and acid green with three orange brushes peeking out the top. Painter’s Progress is emblematic of Murray’s approach to art, always respectful of those who’ve come before (especially influences such as Cezanne, Picasso, and Matisse) but never so respectful that she wouldn’t bend or break a few rules in the name of making a good picture. 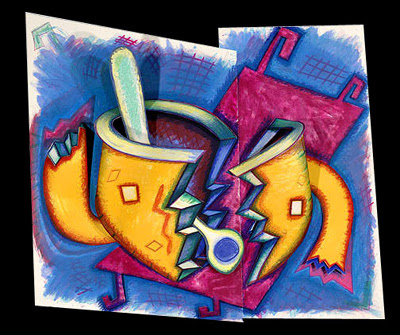 Like most women artists, Murray always fought for wider recognition. Her 2005 retrospective at the MOMA thankfully came while she could see it for herself. Aside from her gender, another strike against Murray in her claim for fame may have been her positivity. When selling an artist, it never hurts to play up the torment behind the art, a fact evident in the elevation of figures such as Van Gogh, Jackson Pollock, and Frida Kahlo from great artists to cultural icons as much as for what they created as for what they endured. Murray may have been just too nice to be famous. In late works, such as 2001’s Jazz (above), she continues to pursue the same artistic approach of riffing on the past (here the coffee cup found in many a still life by Cezanne) while injecting her own key notes of color and explosively playful design. Perhaps posthumous fame is in the cards for Elizabeth Murray, who certainly deserves it.

[BTW, Richard Lacayo at TIME Magazine posted some thoughts on Elizabeth Murray around the time of her death here, here, and here.]