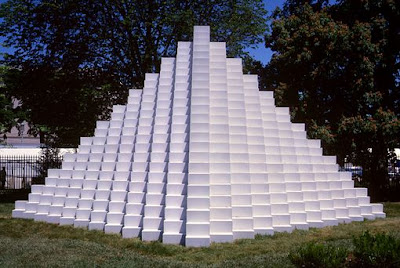 Growing up, the three saddest words on the side of any toy box for myself and my mechanically challenged father were “Some Assembly Required.” Sol LeWitt, born September 9, 1928, brought the idea of “do it yourself” to modern art as the father of conceptualism, in which he was the “idea man” for works of art such as his 1997 Four-Sided Pyramid (above), leaving the hands-on making of art to others. Sadly, LeWitt died on April 8th of this year, leaving behind a legacy of humor and warmth in the too often chilly world of modern art. 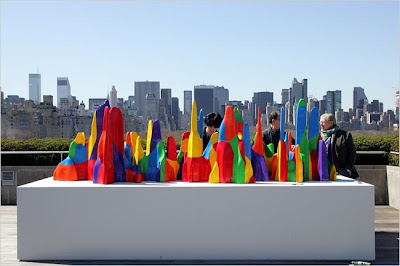 LeWitt worked several jobs before achieving artistic fame. Stints in the design departments of Seventeen Magazine and architect I.M. Pei eventually led to a job in the bookstore of the Museum of Modern Art in 1960, where he saw firsthand the works of rising art stars such as Jasper Johns and Robert Rauschenberg and made contacts with similarly minded young artists. Less than 20 years later, the MoMA hosted the first retrospective of LeWitt’s work. LeWitt’s approach took the artist out of the artistic process physically, rendering the artist into a being of all mind, devoid of physicality. Works such as Splotches (above) render abstraction not only of form but of being, erasing the individual hand so over-present in works such as those of the Abstract Expressionists. (LeWitt actually used a computer program to design the sequence of peaks of his Splotches.) Often I’ve looked up at the ceiling of the PMA’s modern art section to view LeWitt’s On a Blue Ceiling, Eight Geometric Figures: Circle, Trapezoid, Parallelogram, Rectangle, Square, Triangle, Right Triangle, X (Wall Drawing No. 351). LeWitt never touched that ceiling at all, selling to the PMA the idea of the work along with a complete set of instructions for what paints to use, positions, etc. By selling his works as ideas, LeWitt creates a strange form of immortality for himself in the possibility that “his works” will be created after his death with the same legitimacy as when he was alive. 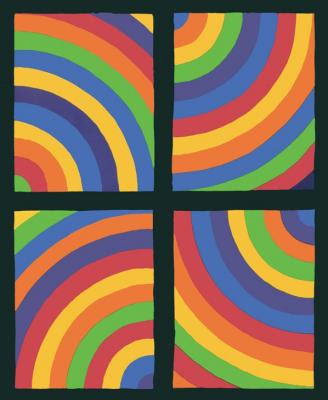 I love the colors in LeWitt’s works. The brightness and simplicity open up and embrace the viewer. Here is a brand of modern art that children can appreciate not because it is “lowered” to their level but because it recreates their sense of wonder at the simple play of shapes and colors for aesthetic pleasure, as in Arcs in Four Directions (above). LeWitt suffers from “I could do that” syndrome as much as if not more than most modern artists. Of course, that’s the point—you can do that, anyone can do that, because, as LeWitt may have said, everyone should be doing that.