Considered by some the greatest living American artist of the first two decades of the 20th century, Arthur B. Davies fell into relative obscurity shortly after his death in 1928. Born September 26, 1862, Davies helped introduce European modern art into America through his involvement with the 1913 Armory Show, perhaps setting off the chain of events that led to his fallen reputation. In works such as Maya, Mirror of Illusions (above), from 1910, Davies created Symbolist netherworlds in his paintings, peopling them with nymph-like nudes in indistinct, yet evocative landscapes. Davies own personal life was spent in an illusory netherworld of his own making, too. 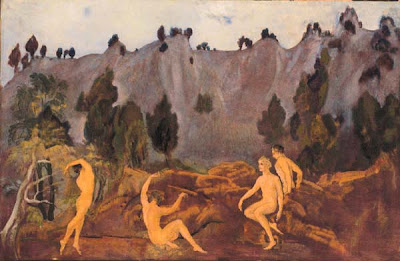 After moving to New York City in 1896, Davies began work as a magazine illustrator, developing the style that would lead to paintings such as The Hesitation of Orestes (above), from 1915-1918. Like his contemporary painter/illustrator Maxfield Parrish, Davies combined great draftsmanship with a flair for fantasy imagery that took fragments of past mythologies, such as the story of Orestes, and wove whole narratives around them. This narrative power and murky mysticism lead some to compare Davies’ work with that of Albert Pinkham Ryder, another contemporary working in the Symbolist vein. After some early successes, a benefactor paid for Davies to travel to Europe to study, where he encountered the latest trends in modern art. 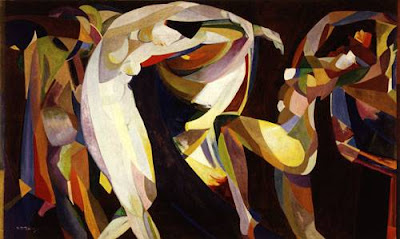 Davies soaked up many of the influences he found in Europe. Dancers (above) shows the influence of Cubism as well as the bright palette of the Fauves {http://en.wikipedia.org/wiki/Fauvism } . Davies soon aligned with like-minded Americans such as Alfred Stieglitz and Robert Henri and The Eight to bring modern art to America. The 1913 Armory Show that introduced Duchamp, Picasso, and other visionaries to America would not have happened without the efforts of Arthur B. Davies. After Davies’s death, the first president of the MoMA credited Davies with the idea of a modern art museum in America. While championing modern art in America, Davies led a kind of surreal personal life, first marrying a woman who had murdered her first husband and then living a double life between his wife and two children and his mistress and their child. The life and work of Arthur B. Davies, however, continue to defy the odds by remaining in obscurity.