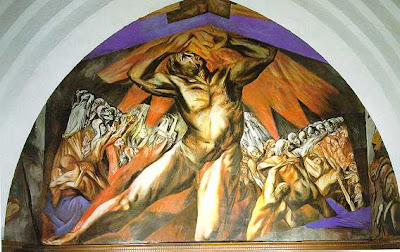 Born at the foot of a volcano, Mexican muralist Jose Clemente Orozco played in the yard as a young boy as the volcanic ash would waft down. In recently aired episode of the PBS American Masters series on Orozco, we learn that he was in many ways a “man on fire” full of spiritual, political, and artistic convictions. Unjustly overshadowed by his contemporaries Diego Rivera and David Alfaro Siqueiros, Orozco’s reputation gets a great boost in this beautifully produced documentary, full of the life, humor, and horror Orozco experienced and transformed into art. Like his Prometheus mural (above, from 1930) at Pomona College in California, Orozco brought down a fiery spark from the heavens for the benefit of his fellow man and woman. 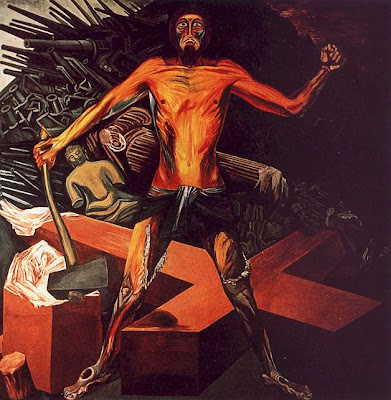 I confess that I knew little about Orozco before seeing this documentary, which is still being run on PBS channels across America. After seeing Orozco’s stunning work, which combines Expressionist technique with the baroque spirituality and humor of Mexico, you’ll agree that his name belongs right there beside those of Rivera, Siqueiros , and Frida Kahlo in the pantheon of Mexican artists of the twentieth century. The sensibility that portrays Jesus as Liberator (above), from the Modern Migration of the Spirit mural at Dartmouth College in Hannover, New Hampshire, deserves greater fame. Orozco shows Jesus sprung from the cross, wielding the axe he has just used to chop down his cross as a sign that he is no longer the meek Lamb of God, hero of the suffering masses, but the Lion of God, leading those masses to freedom. Amazingly, Orozco did all of this with one hand, having lost the other in a tragic fireworks accident. Orozco actually burned the amputated hand to ashes himself, making a ritual of the loss and seeing it as a sign that fate had destined him to be a painter by making him unsuited for anything else. This PBS American Masters documentary shows how Orozco seized that destiny and turned his disability into a liberating vision for all.
Posted by Bob at 12:52 PM