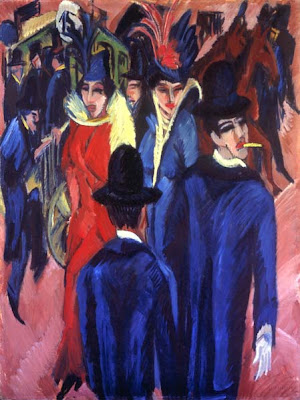 To celebrate the Neue Galerie’s recent acquisition and exhibition of Ernst Ludwig Kirchner’s Berlin Street Scene (above), painted in 1913-1914, the Neue Galerie published a companion book by Pamela Kort tracing the significance and following the long journey of the painting from Kirchner’s studio to their gallery in New York. With this publication, the Neue Galerie puts Berlin Street Scene prominently on the art world map and simultaneously reevaluates the reputation of Kirchner, helping elevate him to the highest echelon of German art. 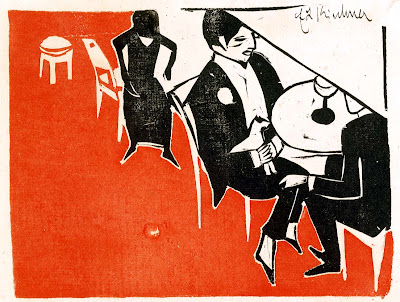 Kirchner saw Berlin Street Scene as “authentic German drawing,” later commenting that, through “the rhombus of the heads that is twice repeated… life and movement arise from a basic geometric form.” Kort breaks down Kirchner’s painting using Kirchner’s own words to show how this attention to geometry and form, arising perhaps from his early architectural training, allowed Kirchner to create a whole new language of drawing. “Kirchner was eager to find a way of drawing that would register the essentials of reality without duplicating it,” Kort argues. This sense of essentials without complete verisimilitude appears in other works such as the colored woodcut of a café above. The bold lines and bolder red coloration recreate the bustle and sexual energy of the cafe more truly than any realistic representation. 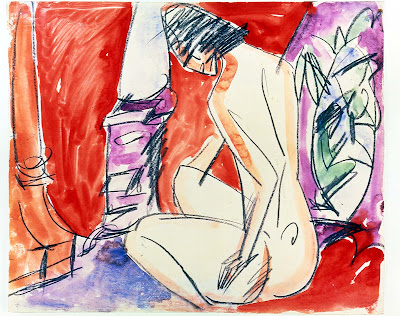 Kirchner’s relationship with the Schilling sisters, Erna and Gerda, becomes central to Kort’s analysis of the painting. Writing of the Schillings, who became both his models and lovers, Kirchner says, “In thousands of drawings, prints, and paintings these bodies shaped my sense of beauty in creating the physically beautiful woman of our time.” (A nude study of one of the sisters appears above.) Kort shows how Kirchner used these two women as the launching point for a bold exploration of reality, a process of “synkrisis” involving “Kirchner’s mixing of different levels of reality.” Because of the pre-World War I crackdown on prostitution in Germany, prostitutes had to dress respectably and use subtle cues to hawk their wares—so subtle that well-to-do women were often confused for prostitutes (and vice versa). Kort shows how Kirchner takes advantage of this confusion to create multiple layers of identity for his female figures. “Social reality is not rendered here,” Kort writes, “It is aestheticized—even eroticized—as part of Kirchner’s pursuit to put down in paint the relational tensions of figures in the streets.” 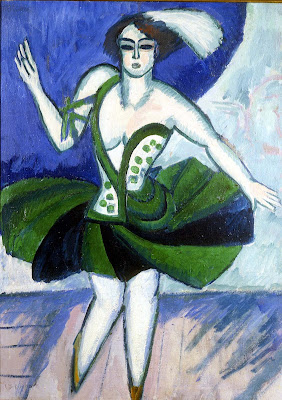 Kort places Berlin Street Scene within the context of other street scenes painted by Kirchner between 1913 and 1915 and demonstrates how Kirchner increasingly became aware “the selling of the feminine mystique as a painted consumer item.” Like prostitution, modern art fell victim to increased official censorship in the run-up to World War I, linking the two in Kirchner’s mind. As female sexuality became more of a commercial enterprise, Kirchner increasingly saw the link between art and commerce. Other works such as Russian Dancer (above) show how the female figure had been reduced to a commodity, marketed and displayed like any other good for sale. In other works such as his Judgment of Paris, mimicking that of Lucas Cranach the Elder, Kirchner examines the dynamic of how women “asked to be looked at” and how men make the choices, just as the man in Berlin Street Scene chooses between the two women and Kirchner finally chose stable Erna (dressed in Berlin Street Scene in blue as “a kind of de-eroticized Madonna”) over the lusty Gerda (shown in Berlin Street Scene “swathed in red,… a dangerous siren”).

Kort follows with the sad dénouement of Kirchner’s life, starting with his embrace of National Socialism in the early 1930s stemming from his sense of German nationalism. “Interestingly,” Kort writes, “the more it became clear to him the extent to which his work was being driven to the perimeters of the German art scene, the more he underscored himself as a German artist.” By 1937, the Nazis had removed Kirchner’s works from German museums and included him in the "Degenerate Art" exhibit. Kirchner took his own life in 1938, leaving behind a final self portrait hidden behind another work that remained hidden until 1970. This final portrait leaves a haunting final image of this great artist.

Kort concludes the book with a brief history of the painting’s provenance from Kirchner’s hands to the Neue Galerie’s doorstep. It reads like a brief history of the tragic tale of art during Europe’s cataclysmal 20th century. The story of Berlin Street Scene’s improbably survival through two wars and restitution to the heirs of the rightful owners in 2004 reads like adventure fiction, except that you know it was too terribly real.

Although a slender volume, Ernst Ludwig Kirchner: Berlin Street Scene boasts many beautiful color reproductions and a plethora of photos of Kirchner and his circle as well as of the Berlin streets of the time. The electric blue endpapers featuring street maps and street scenes of Berlin circa 1914 first caught my eye and raised my expectations for greater things inside. I wasn’t disappointed. Pamela Kort takes Berlin Street Scene apart brick by brick and rebuilds it in our imagination just as Ernst Ludwig Kirchner rebuilt and reshaped it in his own.

[Many thanks to the Neue Galerie for providing me with a review copy of this book as well as the images above from the exhibition.]