As American tumbled to the lowest point of the Great Depression, Franklin Delano Roosevelt rallied the country with the words, “We have nothing to fear but fear itself.” A little over two decades later, the United States government got into the fear business in a big way by shutting down one form of horror and replacing it with a form of their own. The Horror! The Horror!: Comic Books the Government Didn't Want You to Read! brings the horror comics of the 1950s back to life. Selected, edited, and with commentary by Jim Trombetta, these pre-Comics Code comics tell an even scarier tale than that of vampires, werewolves, and zombies—a tale of censorship and control that should scare anyone who cares about art and cares about how governments shape it using tactics that are downright scary. Please come over to Picture This at Big Think to read more of "Scare Tactics."

[Many thanks to Abrams ComicArts for providing me with a review copy of The Horror! The Horror!: Comic Books the Government Didn't Want You to Read! Selected, edited, and with commentary by Jim Trombetta.]
Posted by Bob at 11:01 AM No comments: Links to this post

A Prayer for the City: The Truth About the Barnes Foundation 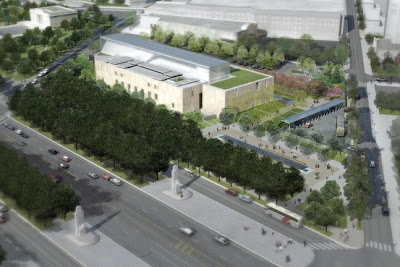 Buzz Bissinger titled his profile of then-Mayor of Philadelphia Ed Rendell’s efforts to save his city from the brink of fiscal disaster, A Prayer for the City. Philadelphia, my native city, always seems to be fighting out of some corner, especially perceptual ones. The soon to be realized move of Dr. Albert C. Barnes’ Barnes Foundation to Philadelphia from a nearby suburb has unsurprisingly brought out many of the old prejudices against the city. Sadly, even respected art critics such as Christopher Knight of The Los Angeles Times fall into the trap of bashing the city in the name of “preserving” the revered intentions of the good doctor’s vision. Here’s my prayer for greater understanding of the truth behind the Barnes Foundation move and a plea for new respect for my city. Please come over to Picture This at Big Think to read more of "A Prayer for the City."

Posted by Bob at 8:14 PM No comments: Links to this post

A Method to His Madness: Franz Xaver Messerschmidt


“Though this be madness, yet there is method in't,” Polonius says in Act 2 of Shakespeare’s Hamlet after an exchange with the title character. After encountering the unique sculpture of Franz Xaver Messerschmidt, you can’t help but feel the same way. In Franz Xavier Messerschmidt 1736-1783: From Neoclassicism to Expressionism at the Neue Galerie, the tragically underexposed tragic artist gets the attention of the American public for the first time. A successful portraitist of the nobility and the rich, Messerschmidt suffered some kind of breakdown in 1771 that left him reeling. He found some kind of anchor in a series of “character heads” modeled after his own appearance that served as talismans against the demons he felt chasing him. That haunted feeling makes Messerschmidt’s eighteenth-century art seem remarkably modern—a study of demonology that set a precedent for the demons to come in the twentieth century. Please come over to Picture This at Big Think to read more of "A Method to His Madness."


[Many thanks to the Neue Galerie for providing me with the image above and a review copy of the catalogue to the exhibition Franz Xavier Messerschmidt 1736-1783: From Neoclassicism to Expressionism, which runs through January 10, 2011.]
Posted by Bob at 8:24 PM No comments: Links to this post

“I’m the plainest kind of fellow you can find,” painter Grant Wood told an interviewer in the 1930s, the height of his fame. “There isn’t a single thing I’ve done, or experienced, that’s been even the least bit exciting.” In Grant Wood: A Life, R. Tripp Evans demonstrates just how deceitful Wood’s protestations really were. Instead of the well-worn tale of normalcy beyond compare, Evans, an art history professor from Wheaton College in Massachusetts, weaves a more gothic tale of subversion and submersion that reveals a new view of Wood as a tortured homosexual artist miscast as a purveyor of Reagan-esque Americana in works such as the iconic American Gothic (shown above). Through new readings of the works themselves as well as of Wood’s posthumous existence in the popular consciousness, Evans gives us the Grant Wood that the artist himself never could. Please come over to Picture This at Big Think to read more of "Gothic Tale."

Posted by Bob at 5:30 PM No comments: Links to this post