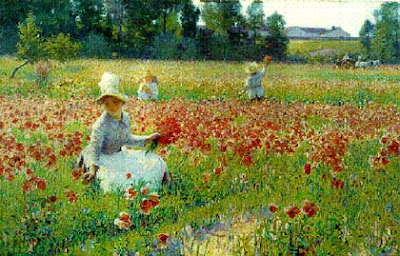 American Impressionist Robert Vonnoh was born on September 17, 1858. Vonnoh remains one of the many forgotten figures of American Impressionism. While other American artists such as Theodore Robinson were learning Impressionism at Giverny at the feet of Claude Monet, Vonnoh studied in Grez-sur-Loing and Paris, more rural centers of art study. Vonnoh’s most well-known work doesn’t even carry the title he gave it—Coquelicots (i.e., Poppies). A later owner added the name of John McCrae’s World War I poem “In Flanders Fields—Where Soldiers Sleep and Poppies Grow,” incongruously covering over Vonnoh’s tranquil scene with the horror of war, perhaps to match the incongruousness of the original poem. This switch seems to be indicative of Vonnoh’s luck—always in the wrong place or at the wrong time. 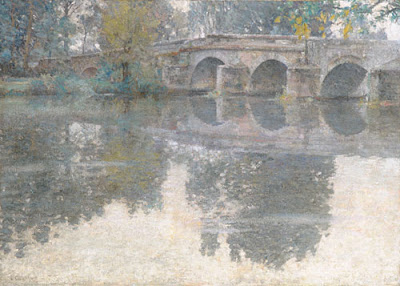 Vonnoh’s style emulates that of fellow American Impressionist J. Alden Weir in subjects such as his The Bridge at Grez (above) from 1907-1911. At other times, as in Poppies (top of post), he’s a colorist styled after Monet himself. This chameleon aspect of Vonnoh testifies to his great technical skills and versatility, but, again, makes it tough to pin him down as an artist. Vonnoh put those great technical skills to good use as a professor at several institutions, including the PAFA from 1891 through 1896. 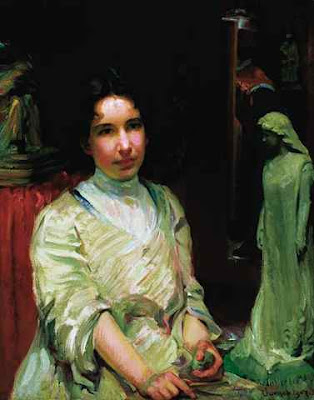 Vonnoh’s married the diminutive sculptor Bessie Potter in 1899 and they remained together until his death in 1933. Bessie became one of the first American woman sculptors to rise to prominence. Vonnoh’s portrait of his wife (above) from 1907 shows her working and clearly demonstrates his pride in her skill. This portrait departs markedly from his Impressionist style, featuring instead the dark background and realistic approach of the school of Thomas Eakins, which Vonnoh may have absorbed during his tenure at the PAFA, along with some free brushwork in depicting the folds of her clothing. What Vonnoh could have achieved under the right circumstances we’ll never know.