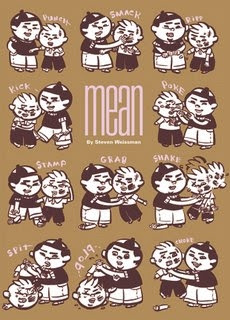 In one episode of Steven Weissman’s Mean, his latest collection of “Yikes!” comics, one of his adorable urchins complains about the price of comic books today. “I know! I know!,” the store owner replies. “What can I do? Haven’t you heard!? Comics aren’t for kids anymore!!” Comics may not be for kids anymore, but Weissman’s Mean is for adults who remember what it was to be a kid or need a refresher course to deal with the little darlings around them. With “Yikes!,” Steven Weissman stands firmly in the tradition of Charles Schulz’s Peanuts and the Our Gang movies, turns around, and drops his pants—affectionately. 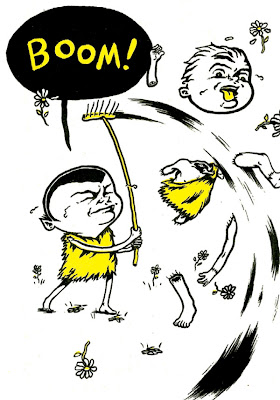 Weissman’s main characters (above) are a vampire child named Lil’ Bloody and Pullapart Boy, whose father (Professor Boy, of course) stitched him together like Frankenstein but not well enough to keep him from going to pieces now and then. Together with their friends—Dead Boy (Pullapart Boy’s zombie brother), X-Ray Spence (the kid who actually sent away for those x-ray glasses in the comic book ads), and Kid Medusa (“the loneliest girl in town” thanks to her stony glare)—Lil’ Bloody and Pullapart Boy find themselves in all the usual circumstances that cartoon kids get in (shooting marbles, pajama parties, and staging a show) only to have them end up bizarrely (the Devil arrives to shoot marbles for a soul, Pullapart becomes the piñata at his own party, and their production of Richard Wagner’s Die Walkure peters out chaotically). With the same grasp of child psychology drawn by Bill Watterson in Calvin and Hobbes, Weissman portrays his little monsters with all the same fears and insecurities real children have. Eschewing sappiness and simple Family Circus punchlines, “Yikes!” shows children as they really are, with all the dark (yet not truly black) humor that comes with being a developing human being.

Weissman sense of humor strays to the wild side of reality quite often, even indulging in time travel to rewrite the story of Adam and Eve and to consider the implications of a vampire loose in ancient Rome. Here is the infamous Seinfeldian “nothing” from a child’s point of view—the unmemorable moments of life growing up that add up to a childhood. If you thought Charlie Brown had it tough, imagine if he could turn the other kids to stone. Weissman amplifies the awkwardness to get his point across, all without ever disparaging the kids or kid-hood itself. There’s plenty of skewering of adulthood, too, such as Lil’ Bloody’s frustrating stint as Professor Bloody (above), English language instructor. Wagnerian references and a frustrating attempt at a Desert Island Discs list also register with an understanding slice of the adult populace.

Most of all, Weissman comes across as a fan—of comics, superheroes, monster movies, and the limitlessness of the imagination. Comic book fans nod with recognition when Weissman brings in the old standbys of overheated Stan Lee-esque prose, doppelgangers, and tall-tale origins, and laugh along with the joke when he turns them all on their heads. At the end of a tribute strip to Peanuts, Weissman writes in all sincerity, “I heart Peanuts!” At the end of Mean, you’d be mean yourself not to say “I heart ‘Yikes!’”


[Many thanks to Fantagraphics Books for providing me with a review copy of Mean and the images above.]