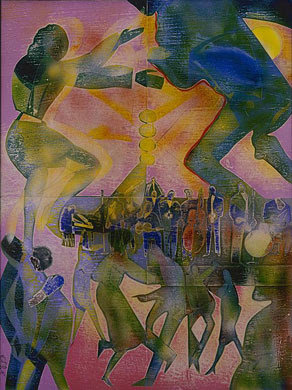 Painter, cartoonist, songwriter, and even professional baseball player, Romare Bearden redefined the term “Renaissance man.” Born September 2, 1914 in North Carolina, Bearden moved to Harlem, New York with his family as part of the Great Migration and encountered the heart of the Harlem Renaissance. Surrounded by this flowering of African-American art, Bearden came to know and learn from figures such as poet Langston Hughes and Jazz composer Duke Ellington. After studying under George Grosz in the late 1930s and living in Europe after World War II (in which he served), Bearden incorporated all the techniques of Cubism and modern art into his unique vision of African-American life. Of the Blues: At the Savoy (above), from 1974, shows the beautiful, color-laden collage technique Bearden forged from all these influences, yet never losing his grip on his cultural roots. Bearden knew racism firsthand. After pitching with the Boston Tigers of the Negro Leagues during his college days, Bearden received an offer to play for the Philadelphia Athletics if he was willing to pass himself off as white, since major league baseball was still segregated at that time. The light-skinned Bearden said no, choosing instead to pursue his career in art. The Family (above) from 1941 shows Bearden’s earlier style, in which he portrayed the African-American experience in a simple and dignified, yet quasi-modernist manner, similar to the styles of William H. Johnson and Jacob Lawrence, the other major African-American artists of that time. Although he studied under Grosz, whose New Objectivity style cast a jaundiced eye on Weimar Germany, Bearden never paints a negative vision of American racial tensions, choosing instead to celebrate the African-American experience positively and with pride. 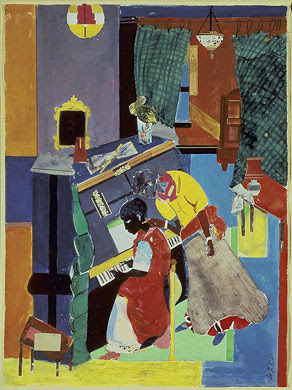 Bearden’s grew more and more successful near the end of his career, receiving a National Medal of Arts in 1987. The Romare Bearden Foundation was founded to promote not only his work but also all African-American art. The Piano Lesson (above) from 1983 shows a young Mary Lou Williams learning the piano technique that would one day make her a Jazz giant, albeit one still woefully neglected even today. With this Piano Lesson, Bearden directly engages similar works by Henri Matisse, one of Bearden’s many influences, yet simultaneously transcribes that work into his own unique idiom. Playwright August Wilson, inspired by Bearden’s work, based his Pulitzer-prize-winning play The Piano Lesson on this collage. Bearden’s images continue to inspire not only African-American artists, but all artists with their creativity, integrity, and enduring spirit.