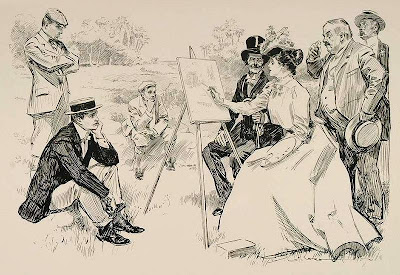 The Everywoman to Everyman in America from the 1890s to World War I, the Gibson Girl captured the imagination of tastemakers and illustrators for nearly 30 years. Brainchild of illustrator Charles Dana Gibson, born on this date in 1867, the Gibson Girl found herself surrounded by suitors (as in The Art Lesson, above, from 1901) but few suitable ones. With her perfect hourglass figure, mountainous piles of lustrous hair, and delicate features, the Gibson Girl set the unattainable ideal for young women everywhere, thanks to Mr. Gibson himself. 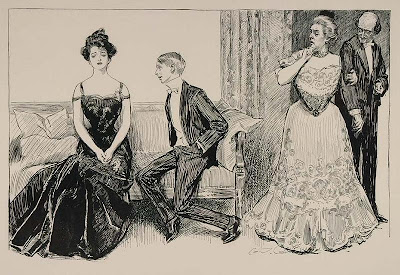 Gibson based the original conception of the Gibson Girl on his wife, but many models were used over time, including the winner of a magazine contest for a real-life Gibson Girl named Camille Clifford, who actually garnered a short film career from her good looks and Gibsonian fame. Despite her great beauty, the Gibson Girl rarely found romantic opportunities, suffering instead the intentions of sad swains such as the one above in The Crush, from 1901. The Gibson Girl had brains, too, bettering herself through education (but never so much brains as to ask for the right to vote, still forbidden to women in the United States at that time). After World War I, the 1920s and the Jazz Age offered up a new ideal woman—the Flapper. Gibson’s creation seemed a quaint relic of the past next to the liberated (and soon to be enfranchised), Charleston-dancing Flapper.

My favorite “Gibson Girl” in art history isn’t by Gibson himself. At the Metropolitan Museum of Art in New York City proudly stands Mrs. I.N. Phelps Stokes in John Singer Sargent’s double portrait of her and her husband from 1897 (above). Mrs. Stokes embodies the ideal of the Gibson Girl in all her vivacity and freshness. Sargent originally intended to paint Mrs. Stokes as if she had just returned from a brisk walk with her greyhound, the flush of exercise still coloring her cheek. When the dog was unavailable to pose, Mr. Stokes gamely stood in its place. Sargent places Mrs. Stokes front and center, literally outshining her husband with her life force, pushing him not only to the edge of the frame but back into the shadows. The double portrait of Mrs. and Mr. Stokes beautifully captures this cultural moment of women on the brink of liberation yet still placed on a well-deserved, yet sometimes constricting pedestal.