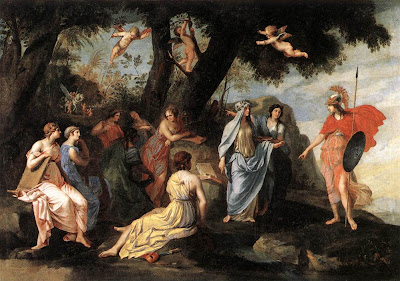 Friend and colleague of Nicolas Poussin, Jacques de Stella shared much of the master’s cool classicism and love of planting mythological figures in timeless bravura landscapes, such as his Minerva and the Muses (above), from 1640-1645. Stella, born September 19, 1596, came close enough to Poussin’s style that many of his works were mistaken for Poussin’s after his death. Such are the hazards of attribution when artists work so closely together and neglect to sign their works. 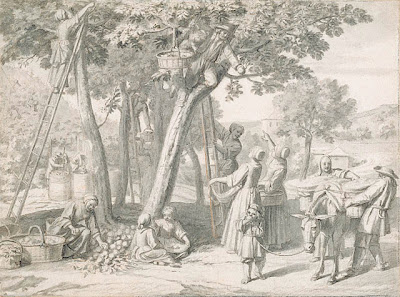 Stella spent most of his early career in Italy, moving to Florence in 1616 and working for the wealthy Medicis and alongside the artist Jacques Callot. Callot taught Stella the art of engraving, taking full advantage of Stella’s already remarkable draftsmanship skills. An Apple Harvest (above), from 1655, represents the high level of drawing Stella achieved and how he was able to take such simple genre scenes and create mini-masterpieces. When Stella moved to Rome in 1623, he met Poussin and became one of the few intimate colleagues of the master. Poussin’s reserve is legendary, so Stella must have been a charming and disarmingly good artist to catch his eye. 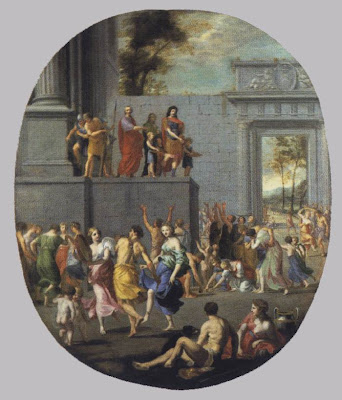 Stella returned to France in 1636. Cardinal Richelieu presented him to King Louis XIII, who promptly named Stella “Painter to the King.” Propaganda pieces such as The Liberality of Louis XIII and Cardinal Richelieu (above), painted by Stella in his first year as the King’s official painter, helped put food on the table and garner additional political clout. It seems almost sad to see Stella “sell out” here and misuse his Poussin-esque classicism in the cause of “the man” and his right-hand man. Whereas Minerva and the Muses seems graceful and balanced, The Liberality strikes me as simply absurd, a chaotic mess of humanity in costume dress, frolicking amidst ancient architecture and even tiny cherub-like boys. Looking at such works makes you wonder what Poussin would have said.
Posted by Bob at 6:13 AM