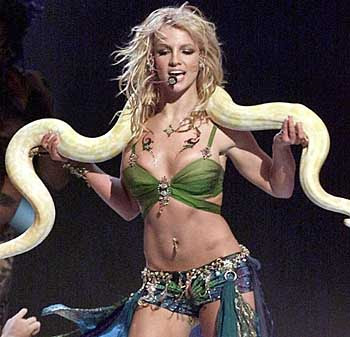 Thanks to everyone who took part in the first Art Poll by Bob asking which episode of Simon Schama’s The Power of Art was “the most powerful” for you. At the end of August, the clear winner was Van Gogh (6 votes), trailed by Rembrandt and Turner (3 votes each), with David (2 votes) and Caravaggio (1 vote) bringing up the rear. I’m going to chalk up the light response to late Summer vacations and the fact that a large portion of my readership consists of non-television-owning intellectuals (hah!).

But with September, I’ve decided to really rock the vote and ask the musical question: What is your favorite art- or artist-related song? I’ve come up with a list to satisfy the young, the old, and the in-between, with dueling Monas, too:

So, whether you have a soft spot for Van Gogh (the defending champion) or think that Britney (above, in simpler times, with a friend) might still make a comeback (to sanity, perhaps), let your voice be heard and cast your vote today.
Posted by Bob at 5:57 AM

Thanks, Marc. I'll have to find that one and give it a listen. I'm sure that people will be checking in with suggestions that I missed. I might have to run music poll part deux.

Not an art song per se, but Neil Diamond's "Done Too Soon" mentions Mama Whistler (of "Whistler's Mother" fame) and Henri Rousseau. And where else can you find a song that references Jesus Christ, Humphrey Bogart, John Wilkes Booth, Karl and Chico Marx, Albert Camus, and Buster Keaton too?

Plus it contains one of the most poignant lyrics ever: "They have sweated beneath the same sun, Looked up in wonder at the same moon. And wept when it was all done, For being done too soon."

As much as I love Neil, I don't know that one, but I'll have to check it out. Sounds much more profound than that "not even the chair" bit in "I Am, I Said."